I went to my first tournament as an alumnus this past weekend as Grand Valley hosted all four Michigan schools. It was quite an odd feeling watching my old team play without being out there with them, and especially hard when MSU vs CMU went to overtime. But regardless, I enjoyed myself and was able to watch a tournament from a new perspective. Here are four standouts, one from each school, who are some lesser known players on their respective teams.

Aaron Krafft (GVSU #22) – Out of the four players in this article, Aaron is easily the most well-known. Kevin loves to praise his play and probably called him “the best kept secret in the league” a couple times last year. Kenny even mentioned him in his preview article as a player to watch. So the question you might ask is why he is being mentioned on this list of lesser known players. Well, for one, I think there’s a good possibility he will be the best player on GVSU come Nationals. Two, every time we complimented a player on GVSU from the sidelines throughout their game against CMU, they immediately threw a catch or got hit. I think Krafft was the only one to avoid succumbing to the “commentator’s jinx.” Throughout the game against the Chippewas, Aaron was the most consistent player on the court. He methodically picked off players and was able to make several catches when targeted. He took over late in the second point to secure a 2-0 lead and essentially clinch the win. Look for him to continue to progress as the season continues and he will make sure you don’t forget his name, or how it’s spelled (two f’s). 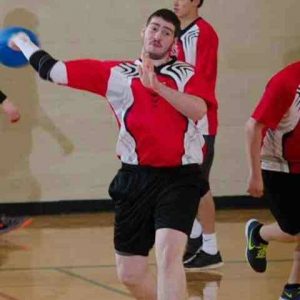 Garrett Fitzgerald – (SVSU #68) Full disclosure, I was only able to watch one half of SVSU play on Sunday. That being said, I am still pretty familiar with all these four schools and their players from my career. One thing I did notice in that half is SVSU has begun to rely on Garrett more and more. He has developed a very solid throw that can pick people off if they’re not careful. He also moves quite well for a big man, so he’s not as easy to get out as you might think. His team clearly recognized his improved play and leadership, as he earned a spot as one of SVSU’s co-captains for the season. I know next time I’m able to watch SVSU play, I will keep my eye out for Fitzgerald on the court.

Austin Brege (CMU #3) – Central had a couple of rough games on Sunday. The most surprising thing in my mind was witnessing star CMU players drop catches that hit them in the chest time and time again. Several of the more notable Chippewa players were out several times in a single point. One player who did not make that a habit was Austin. Every time CMU got on the ten second shot clock, it seemed Brege was still on the court. He was able to make several good throws to reset the shot clock and even eliminate a few players. He also picked up his teammates and caught some of those throws at his chest. CMU is already a deep team, but if Brege can continue to provide talent deeper in the roster look for Central to put forward many better showings than how they performed on Sunday.

Daniel Kobina Ofori-Dankwa (MSU #31) – I have a deep knowledge of Dan’s game after being his teammate for the previous three seasons. I don’t know if anyone has improved over the course of those seasons as much as Dan has. His first season for MSU, he was a good blocker but had a widely inaccurate throw. But over the course of his career Dan has become a key member for MSU. He appeared in his first ever OT roster on Sunday against CMU, showing his growth as a player. Dan has improved his accuracy tremendously and to go with it he is now a formidable catcher as well. He’s also great on the opening rush, a skill largely overlooked in the league. With a great grasp of strategy and tactics, he also has stepped up in the leadership department and is a vocal on-court senior leader for the Spartans. It’s players like Dan that illustrate how the Michigan teams are able to be at the top of the standings year after year, as the development and improvement of players allows them to reload instead of rebuild.