Three NCDA teams sent players to the Ultimate Dodgeball Qualifiers at Skyzones across the country this past weekend, and two of them won! Grand Valley and Western Kentucky both won their local qualifiers, which means they will be waiting to hear back to see if they qualified for the Las Vegas Finals. Rochester Institute of Technology also competed, but finished second in their qualifier. You can check out my previous post on the tournament here. 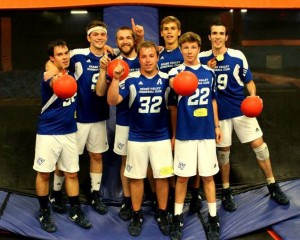 The Lakers went 9-0 in the tournament, winning 19 of a possible 21 points along the way. Here are some thoughts from the GVSU Team:

“We were very excited to win the Grand Rapids Qualifier and we are hoping we did enough to make it to Las Vegas. I think we clearly separated ourselves from the other 23 teams in Grand Rapids because we came into the tournament with the expectation that we will be heading to Vegas for the finals. It would be an awesome experience to play on national television in Las Vegas and promote the NCDA as much as possible. This type of event could give the league a huge amount of much needed.”

“Trampoline dodgeball is intense. Overall, the competition was solid, and the event was just a blast to be a part of. I would love the opportunity to play in Las Vegas and help the sport grow in any way possible.”

“This version of dodgeball is just as much fun as College Dodgeball. Some of the same strategies that we normally use can be applied in this environment, just in a different manner. Overall the tournament was a great experience to meet new people and just play dodgeball. Being able to make it to Las Vegas and be on a national stage would not only be great for our team but be a great way to promote the NCDA and help in its continual growth and prosperity.”

“Trampoline dodgeball was exactly what I expected it to be, dodgeball on trampolines. But I didn’t expect to see a level of intensity comparable to the NCDA. It was fast-paced, exciting, and definitely energy-draining. I like to focus more on catching when in NCDA games but I had to learn the hard way that this isn’t NCDA dodgeball and it’s much harder to catch a ball when your feet aren’t planted, you’re teamates are literally flying in front and in back of you, and the opponent could be throwing the ball at you from 10 ft above your head. It’s a different game of dodgeball that’s for sure but it shouldn’t be overlooked. It was a ton of fun and I would love to do it again…but in Vegas!”

“Dodgeball on trampolines was a wild experience! It felt like a cage match. The games were all high-energy and required a lot of focus. Our knowledge of the sport and our team cohesion worked to our advantage despite the different style of play. The Skyzone staff was great to talk to and the entire tournament was a blast. It feels amazing to know that we now have an opportunity to potentially play in Vegas and represent not only ourselves and Grand Valley, but also the NCDA! I am ecstatic to be apart of the growth of such an enjoyable sport!” 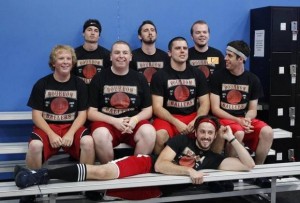 “The trampoline was a great equalizer. It’s tough to focus on the specifics of the game when you’re struggling just to back pedal”

“It was bouncier…Trampoline dodgeball was weird because the other teams were most concerned with doing crazy things on the court rather than actually playing the game. They were also afraid of us. Nobody pushed forward. they stayed back nice and warm”

Both teams now are in a Facebook poll to see who gets a bid to Las Vegas. The team with the most votes out of the 32 qualifiers goes to Vegas, and after that the remaining 7 teams with the best stats at the tournament will go on. Here’s to hoping that both teams can go and represent the NCDA!

We’ll have more coverage on the Ultimate Dodgeball Tournament as it gets closer.