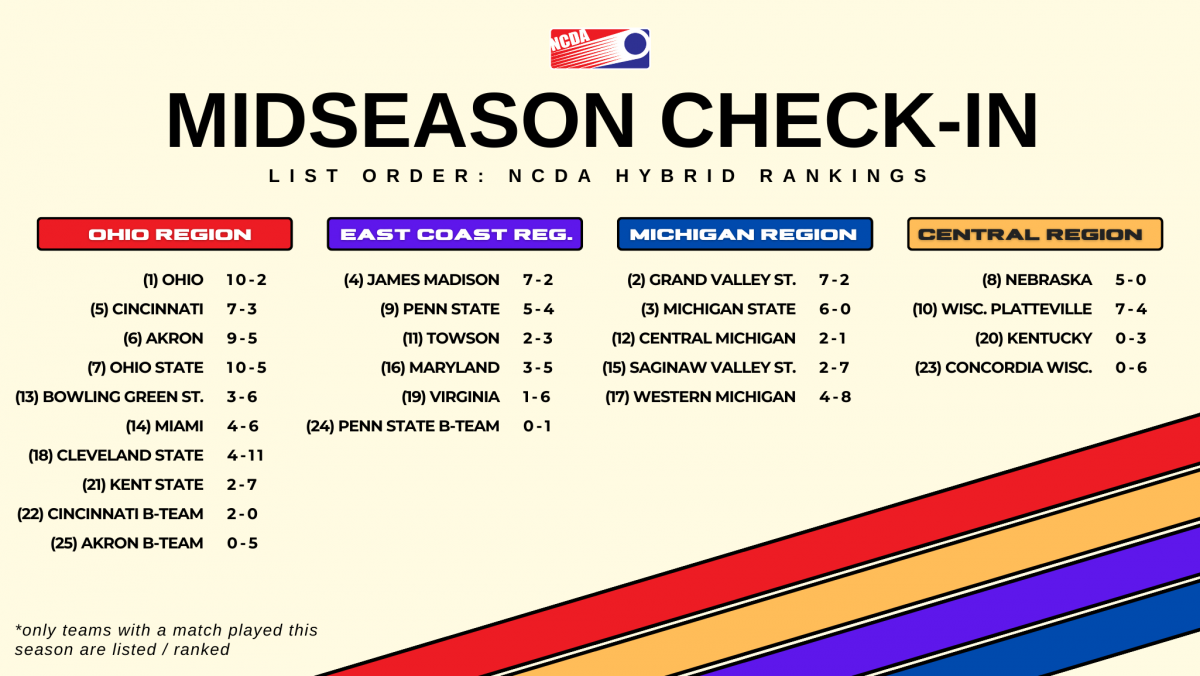 Happy New Year, dodgeballers. As we head into the second half of the 2022-23 season, this seemed like a good time to zoom out and take a look at the league right now and the season we are having. What a season it has been so far! With some epic matches, shocking upsets, and new teams pushing towards the top of the rankings, college dodgeball is alive and well!

Let’s go region by region and break down the overall feel around the league as we head into the heart of the NCDA season.

Where do we start? There have certainly been some surprises in the league’s largest region so far this season. Ohio University is the headliner, sitting at 10-2 on the year and #1 in the country according to the NCDA Standings (#2 in the Power Rankings). This group has a perfect balance of veteran leadership and up-and-coming talent and it has shown so far this year. The Bobcats have been a pleasant surprise this year, and as hosts of Nationals, it will be an intriguing next few months for this program as they look to reach their first ever Final Four.

Speaking of pleasant surprises, Akron has turned some heads this season and sit at #6 in the country with a notable win over #4 James Madison this fall. They have been inconsistent, sure, but the trajectory for this roster is exciting, and they may be a popular dark horse choice come Nationals.

Ohio and Akron have exceeded expectations, but not every team in Ohio has. Cincinnati had a slow start to the year and will need to rebound this winter. The Bearcats have come out a bit flat at a few tournaments, but when you really zoom out and look at their season as a whole, they have all their goals still in front of them. UC has three losses on the year, two to Ohio, but if they can turn things around, they can still win the Ohio Dodgeball Cup and be a National Title contender come April. With the vast amount of talent and experience on their roster, I wouldn’t be shocked to see the turnaround take place.

Ohio State sits at #7 nationally, and while they have won the games they were supposed to win and lost the games they weren’t favored in, this team shouldn’t be written off as just a standard top 8ish team. With a very strong group of young players, the Buckeyes will improve considerably in the winter/spring from a team that already has been able to go toe-to-toe with the likes of Grand Valley State and Ohio.

Rounding out the Ohio Region, BGSU has had some ups and downs, but with near misses against higher ranked teams like Akron and Cincinnati, this squad is no pushover. Miami is turning the corner and one of the most improved teams nationally, Cleveland State hasn’t had the success in the win/loss column that they would like, but their 15 matches played so far this year is tied for most nationally, and that will pay dividends later in the year. Kent State is back! This squad is top heavy at the moment, so look for them to improve their depth in the second half of the year.

Overall, the Ohio Region is deep (nothing new there), but also seems to have more teams that could challenge for a semifinal berth or even a National Title. 2023 ODC should be one of the most anticipated tournaments of the year, and for once could even include a preview of a Final Four matchup?

What a roller coaster of a season so far out east. #4 James Madison remains the top team, but they have losses to #9 Penn State and #6 Akron. Speaking of Penn State, they started out the year HOT (reaching #1 in the standings at one point), but have since cooled off, including a disastrous 0-4 showing at Pink Out VII. Nonetheless, JMU and PSU are the clear top two out east, and with full rosters they both could make some serious noise at Nationals.

Towson has had a quiet year thus far, holding a 2-3 record. Worth noting, one of those losses is an OT thriller to JMU. So maybe, just maybe, Towson at their best is still a dark horse contender in the NCDA this year.

Maryland and Virginia round out the region. While UVA nearly shocked the college dodgeball world taking JMU to OT earlier this season, UMD has been the steadier team overall, boasting a 2-1 head-to-head record against Virginia.

The East Coast hasn’t seen enough out-of-region teams for us to truly gauge where each of these teams stand, and the limited data we have of EC teams playing Ohio and Michigan schools has some very mixed results (JMU beating GVSU, but also losing to Akron, PSU going 0-4 out of region). Time will tell just how well these schools stack up with the teams further west.

Okay, is it officially Michigan State’s region or are we jumping the gun? Michigan State (#3 in the NCDA Standings, #1 in the PR) has been the clear top team in the country this year. The Spartans are one of two remaining undefeated teams (#8 Nebraska – 5-0). Not only is their record clean, but they are passing the eye test with flying colors as well. The Spartans have a loaded roster of veteran impact players and talented young guns, and through the fall semester it has been a recipe for success. Michigan State has a iron-clad resume at this point in the year with wins over #1 Ohio (4-2), #2 GVSU (6-0!!!!), and #5 UC (5-3). The Spartans are just about everyone’s title favorites at this point in the season.

Pair MSU’s dominance with Grand Valley State’s lack thereof, and you see why we are clamoring for this being MSU’s region. The defending champion Lakers came into the year with plenty of returning talent, but have fallen short of expectations thus far. GVSU sits at 7-2, which doesn’t seem all that bad until you find out the losses are a 6-0 drubbing to MSU (largest margin of loss in school history) and their first defeat at the hands of James Madison since 2013. Yikes. GVSU has looked top heavy at tournaments, relying too much on their top few players to make the majority of throws. This program used to boast the deepest roster in the league, and if they can’t get their young players up to speed by Nationals, we may have a new team hoisting the trophy.

Rounding out this region, Saginaw Valley State hasn’t had the giant leap some expected after they finished last season strong. SVSU is historically a second half of the season team, so keep an eye on them. Western Michigan is a much improved team, with more talent on the roster than in years past. This group sits at 4-8, with plenty of upside as we head into the second half of the season. Lastly, Central Michigan, one of the most dominant schools in NCDA history, is back! CMU nearly went defunct after the Covid-19 pandemic, but have since been able to get approval from the school to start the club back up and even attend tournaments. CMU is 2-1 on the year with wins over Kent and CUW.

Finally, the Central Region. And the most black and white in terms of standings. #8 Nebraska (#6 in the PR) leads the way as one of two undefeated teams left in the league. After bursting onto the scene at Nationals 2022, this group picked up right where they left off and have lived up to their billing so far. UNL has faced two out-of-region teams (WMU and CSU) and neither scored a point. It will be interesting to see this team in action against some top teams from other regions to truly get a baseline for where they stand nationally. For now, they are kings of the Central Region.

Behind UNL is Wisconsin Platteville. UWP is 0-2 against the Cornhuskers, but they do have some nice wins on the year including against #6 Akron, #13 BGSU, and #15 SVSU. Platteville is another one of those teams that comes on strong in the winter/spring so watch out for this team.

#20 Kentucky is working to fill out their roster and improve depth, and currently sit at 0-3, while Concordia University of Wisconsin is the newest member of the NCDA and holds an 0-6 record and plenty of newfound experience heading into the winter. Both these schools should be in much better form come Nationals, especially a CUW team that seems to have the athletes to compete once their strategy and experience catch up.

While it would be easy to say it’s been a hectic season so far, we have a feeling this is just the beginning. With plenty of big tournaments scheduled for the winter/spring, there should be even more upsets, and exciting storylines to follow as the year progresses.

Michigan State feels like the clear favorite to win it all. How will they progress in the winter, and could a team like GVSU catch up to them by the Michigan Dodgeball Cup?

Ohio is the top dog in their region right now, but with strong rosters at schools like Cincinnati, Ohio State, and Akron, the Ohio Region feels more like a toss up than most regions.

James Madison has been up and down (per usual), but if they have a full roster, they seem like a title contender once again. Penn State on the other hand, is guilty until proven innocent after their 0-4 showing at Pink Out. The Nittany Lions will enter this semester with a chip on their shoulder and plenty to prove.

Nebraska is the favorite in the Central Region, but we really have no clue where they stand nationally. Could the Cornhuskers be the first team from the region to make a Final Four… or win a title?