As we transition from the first half of the year to the next, I wanted to take a look at where our teams stand at the midway point.  Some of our teams stormed out the gate to start the season, some appear to have lost a step, and others just fall somewhere in between.  While the 2018-19 season isn’t quite over, let’s pretend that everything stopped and we were preparing to hop right into 2019 Nationals bracket play tomorrow.  What would our bracket look like?  What are some of the best matchups?  Who could be our potential ‘Cinderella Story’?

Before we get deep into everything, I wanted to make a couple disclaimers.  First, when designing our midseason bracket, we selected only the teams that have played ranked matches this season.  This means we have 28 eligible teams in a single elimination setup.  Second, all matchups are seeded based on the Gonzalez rankings, as has been the case since Nationals 2017. 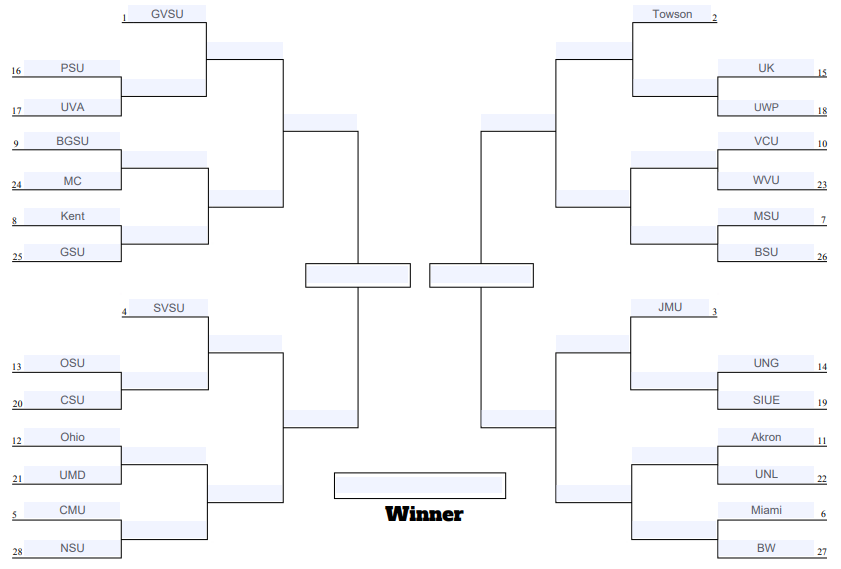 (Feel free to fill out your own bracket for giggles here)

If bracket play were to start this second the 28 aforementioned teams would be ranked as such:

Since it is a 28 team single elimination bracket, the top four seeds would receive “bye” rounds which means they automatically qualify for the round of 16 while seeds 5-28 must play and win their way into that round.

Using our “state of the art” Gonzalez Upset Calculator, we were able to predict each team’s likelihood of making it through each subsequent round, and ultimately how likely a team was to win Nationals 2019.  Here are the results:

Explanation of Chart: As mentioned before, the top four seeds would receive byes in a 28 team format, so they would be guaranteed to move on to the following round.  Each percentage indicated above represents how likely a team is to win their matchup against the most likely team they would play.  For example, let’s look at VCU who is the 10 seed.  In their first round they would be matched up with 23rd seed WVU.  VCU has an 86.48% chance of winning that matchup and thus moving on to the round of 16.  There, VCU would most likely play MSU who is the 7th seed because they are the more likely winner in their first round match.  VCU’s probability of defeating MSU is 42.37%.  As a result, VCU’s overall probability needs to include defeating both WVU and MSU, which is why their probability of reaching the quarterfinals comes out to 36.65%.

As some may or may not have expected, GVSU has a really good chance of winning another national championship.  The degree though, is pretty absurd.  GVSU having a 58.9% chance of winning it all while the next best team, Towson, has an 11.74% chance is pretty remarkable.  It’s even more interesting when you consider the fact that teams on GVSU’s side of the bracket have significantly lower chances of making it to the championship, simply because they would likely play GVSU.

Outside of GVSU and Towson, the model gives JMU and SVSU roughly 5% and 3% odds of winning it all, respectively.  After those four, all remaining teams are given less than a 1% chance of becoming champions.

Path to the Final Four

To go a little bit deeper into seeing how some teams have a greater advantage of advancing it’s important to take into consideration the difficulty of the path before them.  Since seeding is based exclusively on the  Gonzalez rating system, seeds are organized based on the best statistical odds to win each game.  This is why in the columns above for the first round and the chance to win it all it would be organized in straight down descending order.

However, not all seeds and the spreads between them are created equal, which is where we get some of the variety in the rounds between those two.  For example, the gap between #1 GVSU and #2 Towson is nearly 5 points while the gap between Towson and #3 JMU is roughly 2 points.

Bracket design is also something important to consider.  There’s a reason that current #14 seed UNG has better chances of making it to the semi-finals than both #8 and #9 Kent and BGSU, and it all comes down to who you play.  Below are two charts that I think can help better explain that theory which show the average rating each team would face to get to the final four, along with the difference in that team’s current rating and the teams they’re expected to play.

Taking into account the above data there’s some interesting observations to be made.  Under the current model, #5 and #6 seeds CMU and Miami would have the relatively easiest path to the Final Four based on Gonzalez.  It works out this way since both of them would play the two lowest seeds in the tournament as a result of seeds 1-4 having a bye in the first round.  As I mentioned above, BGSU and Kent take a pretty significant hit in their path because they would likely have to face GVSU as compared to teams on the other side of the bracket.

I also mentioned earlier how not all seeds are created equal when it comes to the spreads between them, and the chart on the right showing the difference between a team’s projected path and their rating highlights that.  It paints a pretty distinct picture on how top-heavy the NCDA is at the moment.  With GVSU being about 13 points higher than their expected opponents on the way to the final four, it gives virtually zero chance of anyone to stop them at that point.  To show how unlikely that kind of upset against GVSU would be, the largest historical upset had a rating gap under ten rating points (9.848) across nine seasons of records.

Meanwhile, 17 out of 28 teams find themselves in the negative for that rating, signifying a more difficult gap in their own ability against the teams they are likely to play.  If there’s any takeaway from this, try to avoid GVSU and Towson if you want to make it to the final four.

All that being said, the game isn’t played on paper, and while upsets are harder to come by in bracket play, it’s not impossible, and makes for some of the best games of the season.

It’s a matchup between East Coast rivals and two teams that find themselves right in the middle of the bracket as the 16th and 17th seeds.  Penn State is having a bit of a down year from last season, but has played a fairly tough schedule thus far.  Meanwhile, UVA has been relatively lackluster out the gate, and it’s unclear how they will fare in the coming semester despite having the talent to get some wins.

Cleveland State will be one of the more intriguing teams to watch come Nationals.  It’s clear this team is more competitive than last season and they are bound to get better as the season continues.  They were within one point of both Akron and Ohio who are currently 11th and 12th, respectively.  Ohio State is a team that has a deep history of success in the NCDA including two national championships to boast, and has had some respectable results thus far.  CSU’s upstart phase combined with the brand name of THE Ohio State University make this game feel more intriguing than some might believe.

These are two very balanced units that I think have a lot of upset potential in the next semester.  Ohio has had a sneaky good start to the year by going 8-4 so far, and have proven they can win tight games.  Maryland hasn’t quite seen the same success, but a lot of that can be attributed to their #5 overall strength of schedule.

Best Round of 16 Matchups

*full disclaimer, we are acting under the assumption of higher seeds winning every matchup after the first round

Since Nationals 2016 at BGSU these teams always find a way to run into each other one way or another.  While both teams have been heading in opposite directions this season, this has always been a fun match to watch and each of them can certainly bring out the best in each other.

Arguably one of the best matches of the season came last year at Nationals 2018 when these two teams faced, so why not imagine the same here?  Ironically, it’s the same 7 v 10 matchup we got last year, just with reversed seeds this time.  I don’t think anyone would doubt this as one of the premier games of the weekend if it were to happen.

These two still have yet to face off this season while they have climbed further and further to the top.  Both schools are having their best seasons to date, and it doesn’t seem like that will slow down in the Spring.  Akron boasts a team with a healthy amount of veterans compared to Miami, while the latter is arguably one of the most talented groups in the league right now.

I mentioned beforehand how the Bobcats are flying under the radar right now, and I think that works in their favor.  There’s a couple main reasons I like Ohio as a Cinderella team.  Number one, as mentioned before, they know how to win close games.  They are currently 4-0 in games decided by one point this season, and being resilient under pressure is important during Nationals.  Second, Ohio faced some blows at the end of last semester with injuries to some core players.  Once they are healthier after the break, I expect that to only impact them in a positive way.  Lastly, where they are right now at the 12 seed I believe gives them the most upset potential.  Contingent on them winning their first matchup, they would likely play the 5 seed CMU, who has been inconsistent during the first stretch of the year.

The Spartans are a team that had a slow start to the season when they dropped their first 5 games, but has since gone 4-1.  Everyone knew MSU had the potential to be a top team this season.  They were even picked 3rd overall in the preseason power rankings.  MSU has also easily played one of the most difficult schedules this season, and that will only benefit them later on in the season.  It would be a difficult task for the Spartans to upset Towson in the quarterfinals, however their 4-2 loss to JMU who has defeated Towson could be an indicator that they will be able to hang with the Tigers.

It’s safe to say that Miami has surprised almost everyone this season.  They have picked up some solid wins so far, which includes BGSU, Kent, and CMU.  Miami’s talent has been on clear display this season with stars in Tom Morand, Drew Maxwell, and Austin Michael, and having star power can be just as important as depth in late game moments.  Another thing to consider is that Miami is currently tied for 3rd in the NCDA in games played this season.  More is always better than less when it comes to dodgeball experience.  While it might be a far cry for some to consider the 6th seed a potential Cinderella, in a league that has been historically top heavy this would be huge if it were to happen.