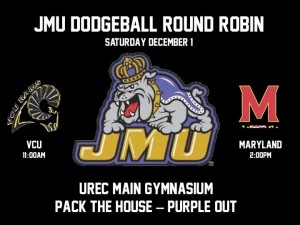 On December 1st, James Madison is hosting the VCU Rams and the Maryland Terrapins for the JMU Round Robin. James Madison is in a great position to move into 3rd in the standings with two wins if they get some help from Grand Valley knocking off Michigan State. Maryland and VCU both have excellent shots at moving up the standings as well, a sweep for the Terrapins will mean they are #5 in the country, and even one win for VCU would put them into twelfth place. JMU has been the most successful East Coast school so far, having already picked up 3 wins in the past two seasons against UMD, and another win over VCU in their only match played. However, Maryland with a win this weekend over JMU could begin usurping the Dukes’ reign of being the top seed in the East, which is always crucial for Saturday pool play at Nationals. It will also be interesting to see if VCU has improved since their debut at the Maryland Invite.

Kentucky, OSU, and Kent State are all off to Miami, OH, this weekend to play in a round robin. Kentucky is the favorite, as they’ve proven they can win with either their “A” team or even their “B” team, and feature some of the best teamwork in the country. Kent State will be after a win against UK, a school they are 0-2 against this season, and OSU and Miami are both going for their first wins of the season. This will be important for who is the second seeded Ohio school at Nationals (Kent State has run away with the #1 seed) as BGSU, OSU, and Miami are all very close to one another. 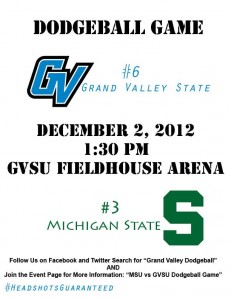 The Lakers and Spartans are probably the big game of the weekend, as two of the most historic teams do battle in the Fieldhouse Arena. For more information on the game, check out the previous post on the match at http://ncdadodgeball.com/?p=1143

These matches will conclude the Fall semester for the NCDA, leading into what could be the most exciting spring yet, with tournaments like the Chicago Dodgeball Open, BEAST II, Michigan Dodgeball Cup, and Nationals 2013 on the horizon.