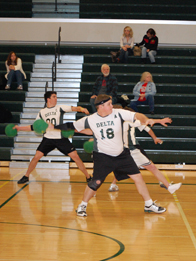 They were all but left for dead in the national championship picture, but the Delta Dodgeball team proved they haven’t gone anywhere.

A 3-1 win Sunday, Jan. 18 over second ranked Saginaw Valley State University (7-2) thrust them back onto the scene.

“Every win is a big win,” Delta Captain Dave Halloran said. “This was just as big as our last win against Bowling Green (in Dec.), and if we win next week against MSU, that will be just as a big as this.”

The game started off in a point that lasted almost 15 minutes before it was decided. After the teams battled evenly for much of the point, Delta was able to finish the Cardinals off for the game’s first score.

The second point of the match appeared headed into the hands of the Cardinals, as they had a seven to two man advantage with four minutes left in the half. However, the Pioneers were able to kill the remaining time in the half preventing SVSU from tying the game before halftime.

“We should have won that point,” SVSU Captain Bryan Janick said. “We screwed that up.”

After the half, the Cardinals made quick work of the Pioneers and took their first point to tie the score at a point a piece.

“We should have played the way we did (that point) the whole time,” Janick said.

However, Delta was able to retain the momentum as they took the final two points of the game, thus clinching their second victory of the season.

The win came as a surprise to some, as Delta had only played one game going into the contest, and SVSU had been on a roll in the season’s first semester accumulating a 7-1 record.

“Delta was never out of the national championship picture,” Halloran said. “I don’t know why anyone would think that (we weren’t.)”

For SVSU, the frustration of losing for only the second time this season was evident.

“We played bad,” Janick said. “Everybody just looked tired. We also had a lot of bad breaks.”

Janick also pointed to the timing of the game on the schedule as to a contributing factor for the loss.

“I think if we had played them the week before we got out (for winter break) it would have been a lot different,” he added. “I think we played bad because it was our first week out of break.”

The two teams are expected to meet again on Feb. 7, during the Michigan Dodgeball Cup tournament.

The tournament features all six of the state’s college dodgeball teams and a state champion will be crowned.

“I definitely can’t wait until we play them again,” Janick said. “We came out like we will be afraid. (The Michigan Dodgeball Cup) will be a lot different.”

However, Halloran thinks his team should be favored to win as well.

“We’re one of two undefeated teams in the tournament and are poised to beat Grand Valley (the other undefeated team) after losing to them in overtime last year,” he said. “We will have the most momentum of any team there.”