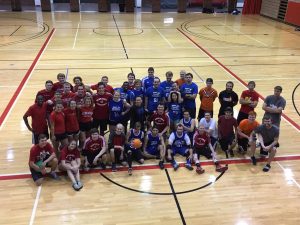 Here is the breakdown of how these games went. 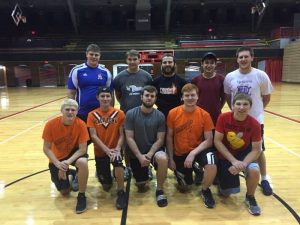 It was an interesting match to say the least and it was another fast pace game between the  teams. Each team pushed the entire time and neither back down as it can be seen with the match going into overtime. In all the years that I have played DePaul this one was one of the most competitive and evenly matched games. The first half was Plattevilles; we were able to get three points on DePaul. In the second half DePaul made some adjustments and came back with three points to tie it up. This led the game to go into overtime. It was here that Platteville was able to finish off DePaul to take the win. What helped Platteville to win in overtime was their ability to make key catches and keep ball control in their favor. 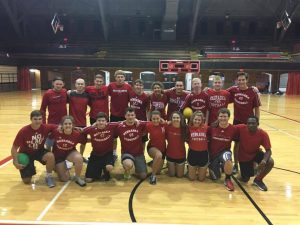 This was a much better team than what Platteville played last year. As a team they were more organized and appeared more comfortable on the court. They pushed and countered against us which is what helped them to victory. In the first half Nebraska took 2 points that they were easily able to get because of a strong start off the line. The second half Platteville was able to bring things together and get a point, but their attempts at tying it up failed. Nebraska is a team that if they can get out to tournaments in the future should provide competitive games for the league. 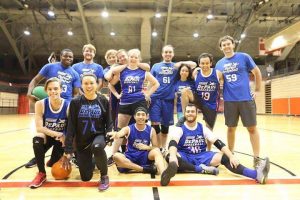 In this game DePaul came out strong and was able to get two points in the first half and one in the second. Nebraska was able to get a point in the second half with a Gladiator face off. Every point of that match was very competitive and came down to a few players. This match up should provide the fuel for competitive games between these teams going into the future.

Here is what each team thought of the tournament and what players impressed them.

“I would say that the tournament was a success in bringing some competitive teams together. The teams overall were very competitive even though Platteville and DePaul did not have full team rosters. The players that impressed him from Platteville were Brian Hargrove and Jeremy Oney and from DePaul were Alec Scott and Brian Hymel. Which I couldn’t agree more with him. Brain Hargrove and Jeremy Oney have improved a lot this year and have shown great leadership in practice and in game situations. Also, Alec Scott has a strong arm and Brain Hymel can catch just about anything that comes at him.”

“On Saturday, September 24th, DePaul Dodgeball participated in the Cornhusker Clash, an NCDA tournament hosted by UNL Dodgeball in Lincoln, Nebraska. One of three teams to compete at the tournament, DePaul ended the day 1-1, only losing to Platteville in overtime. DePaul decided to field the overtime match by seniority, which included club president Brian Hymel, club treasurer Alec Scott, club secretary Ryan Atz, Kyle Keenen, Ricky Gonzalez, and Alex Perez. Platteville was an exceptional team to play against, and it was inspiring to see how well they played together with just a 10-man roster. Brian Hargrove and Jeremy Oney lead their team with hard throws and good catches. They usually lasted until they were the only ones left. It was a very exciting first match of the year, and really showed our new members the standard of what it is like to play in the NCDA. The match versus Nebraska went more our way, and it was exciting to see some of our new players show potential. A standout performer was Nick Holmes, who had impressive catches and kept the fourth point of the game alive, only narrowly falling to Nebraska in a one on one to end the day. Tanner Obermeier and Harrison McMinn of Nebraska should have a great year ahead of them and look like exceptional leaders for their team. Nebraska’s girls were no exception as they took the court and threw at any opportunity that presented itself. Though winning against Nebraska was an upset, it definitely feels like both teams can grow to be great contenders when Nationals come around. DePaul Dodgeball thanks both UWP and UNL for the opportunity to play against them, as well as UNL for hosting the tournament.”

This is what I thought of the tournament and who impressed me. As tournaments go this was one of the best that I have had the chance to play against these two teams. They are excellent competition and they know how to have fun playing the game. The players that impressed me for DePaul were Alec Scott, Brian Hymel, Jon Blanton, and Karin Gumbinner. His jersey may say captain fluffy, but let’s just say that there is nothing fluffy about Alec Scott’s throw. Brain Hymel is a guy that you don’t want to throw alone at, which many of the guys I my team found out. Jon Blanton also impressed me with his ability to stay in the game and help his team when they needed it. Karin Gumbinner also impressed with her abilities to block and to stand her ground when challenged. Nebraska’s players that impressed me were Harrison McMinn, who is dangerous on the cross throw, and players like Jake Sanchez and Tanner Obermeier who both have strong arms. Dalton Dey also impressed me with his ability to handled himself on the court and managing to always be one of the last ones out. Emmie McMinn also impressed me; she wasn’t afraid to get hit and take you on one on one (I bet you her brother Harrison would like to believe that she got that from him).