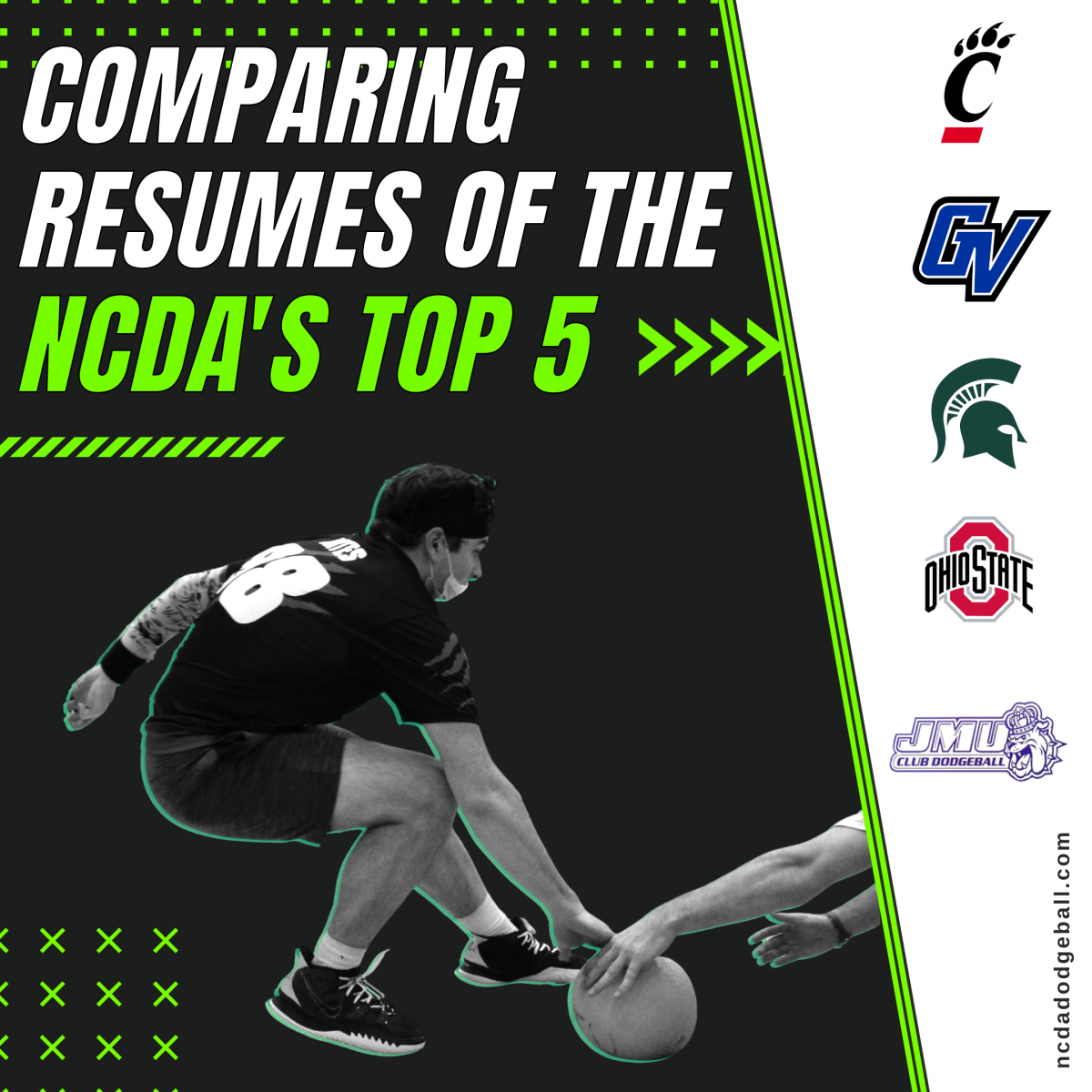 Sitting atop the league is starting to feel like a pretty familiar position for the Bearcats, as they find themselves atop the NCDA Power Rankings for a second time this season (November 2021). While Grand Valley may have leapfrogged them in the Gonzalez standings due to more timely wins against higher ranked opponents as of late, Cincinnati’s 14-2 record is the best in the league. To accompany their stellar overall record, the Bearcats are undefeated in 2022 at 6-0, and won the Ohio Dodgeball Cup in February. Cincinnati holds a 2-1 record against another top 5 team, Ohio State, and a win in December on their home court against the Spartans of Michigan State. It’s not all been sunshine and roses, however, as the Bearcats did lose in December to those same Buckeyes, and way back in early November to Grand Valley in overtime at the 2nd Annual John Betters’ Bobcat Bonanza.

Cincinnati will host & compete in one final tournament prior to Nationals, the Clifton Heights Classic, on March 26th, where they will look to fine tune any strategic deficiencies they feel they may lack as well as get their rookie class some more valuable experience. Speaking of rookies, they have several standouts that have stepped up big time this semester and are starting to take prominent roles in their lineup. Atop their class stands all-around standout, Isaiah Montgomery, power arm Jordan Bowling, and the last-second catching hero of their match against Ohio State at the ODC, Ethan Schlesinger. If these three and the other roleplayers can continue to support the Bearcats’ top core of players as they have lately, nobody will want to run into Cincinnati on Sunday in April.

GVSU landed (controversially?) at #2 in the March Power Rankings after a disappointing month of February. Yeah, disappointing by Grand Valley standards is going 5-1 on the month. The Lakers are the top team in the Gonzalez, and have a nice 13-2 record, with wins over each of the teams ranked ahead of them currently. But, they also have two losses to Michigan State, including the most recent, a blown 3-0 lead, to give up the Michigan Dodgeball Cup. Grand Valley always has a strong resume, and this year is no different. A close win over Cincy in the fall along with the close loss to MSU last month are the two most memorable games this team has played. They have shown their strengths and their weaknesses throughout this year, and while they aren’t the clear #1 like they would like to be, there is still plenty of potential.

With a fully healthy roster, GVSU will certainly be a tough out at Nationals. Their core of Ben Smart, Josh Hill, Tyler Peach, Nick Hehl, Thomas Williamson, etc is very strong, but with limited depth (only brought one sub to MDC), and injury concerns (Smart in particular) there are serious questions if this team can hold up during a two-day tournament, or if they will fall flat in bracket play at Nationals, a la 2018 CMU.

With an 8-3 record on the year, and sitting at 4th in the Gonzalez standings, Michigan State might not jump out on paper, but this team has put together a strong season thus far. The Spartans’ resume includes a Michigan Dodgeball Cup title and a 2-1 record against in-state rival GVSU, which has some wondering, and rightfully so, why the Spartans landed below the Lakers in the latest Power Rankings. Michigan State does have some dents in the armor. MSU is 1-2 against the state of Ohio (a 4-2 win over OSU along with close losses to UC and Akron). The loss to Cincinnati is likely a big reason MSU didn’t vault all the way to #1 in the PR after their thrilling MDC title, while that loss to Akron certainly shows this team still is dealing with some inconsistency (par for the course with so many rookies in impact roles).

Overall, Michigan State’s resume is strong. They chose not to attend WAR V at Akron a few weeks ago, and with that, they gave away a shot to truly cement themselves as the top dog heading into Nationals. The Spartans chose to rest up and heal up heading into the home stretch of the season. From veteran stars like Jack Girling, Barry Butler III, and Josh Kramer, to the loaded rookie class including Alec Deen and Jonathan Crockett, this roster looks the part of a title contender, as does their current resume. Look out for Michigan State on April 9-10 in Kalamazoo.

Ohio State pushes forward with an 11-4 record this season. Ranked 3rd in Gonzalez standings and 4th in Power Rankings, the team has consistently proved to be a force. That being said, 2022 started rough for the Buckeyes. They came out of the Ohio Dodgeball Cup with a 1-2 record and lost rookie star, Derrek Kemper, to an arm injury. A few weeks later, they were able to adjust their strategy with a 3-0 record at Akron’s WAR making promising wins against Towson, Akron, and Cleveland State to reestablish their reputation.

The Buckeyes continue to perform as an all around team – correcting past mistakes, filling gaps in skill sets, and prioritizing rookie growth; every starting player can be counted on. Ohio State is rich with veteran leadership from Dylan Greer, Ryan Ginsberg, and Sam Palumbo, and rookies Ethan Lehmkuhl, Elijah Thomas, and Evan Miller have stepped into invaluable roles. The Buckeyes return to the courts in April for Western Michigan’s National tournament. They will no doubt be competing against the other NCDA Top 5 teams as they make their case for the top Ohio team (Stay tuned for another likely OSU vs. UC toss up). For now, they are preparing to secure their first National Championship since 2006.

The Dukes are on a roll as of late, winners of their last six, after limping out of the gate to a 3-5 start. Ranked 5th in both the Gonzalez and Power Rankings, James Madison has quickly turned their season around with a furious set of matches. They have posted what can only be described as a dominant 31-2 score differential(!) on this winning streak (The last Towson win was a technical forfeit).

While they have certainly been commanding as of late, the Dukes have a lot yet to prove this season. The only time they’ve ventured west, they went 0-3 at the 2nd Annual John Betters’ Bobcat Bonanza, falling to Ohio State and Grand Valley 4-2 and Cincinnati 6-1. It’s certainly a fair critique of their resume this year, but you can bet JMU is thriving off of everyone continuing to doubt them and their growth and capability as we close in on Nationals 2022.

They will no doubt need big performances out of Captain Drew Funk and long-time star Evan Eschenburg, but really it will be the rest of their roster who will have to help carry the weight if the Dukes are going to make a deep run on Sunday, April 10th. Zach Tillery and Michael Cone have been throwing gas as of late, and Patrick Kaczmarek is showing he is as reliable of a catcher as there is in the league. If these five play well and some of the, for now, unknown names on James Madison’s roster can have breakout performances, we’re going to hear a lot of “Roll Dukes!” as we watch them hoist the National Championship Trophy.