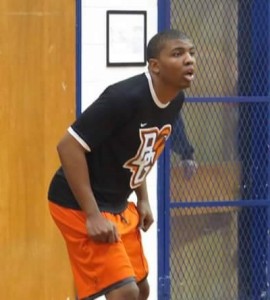 After a strong performance at the Kentucky Invitational, your January Baller of the Month is Tyrell Smith of Bowling Green State University.  Here is an interview I had with Tyrell after the tournament at UK:

Kevin Bailey – First off, congratulations on winning NCDA Baller of the Month.  You have been a standout player for Bowling Green State for a few years now.  What do you think is the reason for your individual success on the dodgeball court?

Tyrell Smith – I give it 110%. I’ll take time after practice to work on my throw. I work on my coordination. Above all that, I have fun out there. I’m very competitive but I also have fun with it as well. I never forget that dodgeball is a fun sport.

KB – I know BGSU was able to bring in a large group of rookies this year.  Can you tell me a little bit about how you guys were able to recruit so well?

TS – My incoming new guys have a lot of raw talent. They are also willing to learn from my older guys. They pick up concepts very quickly. I have a few guys who are just as good as my older guys and in a few years will be players to watch throughout the league. Some want to be great catchers, some are good throwers and I have a few that can do both.

KB – You guys performed fairly well at the Kentucky Invitational a few weekends ago.  What do you attribute your team’s improvement to?

TS – Everyone is on the same page. Our new guys listen to our captains and our captains are all on the same page. I can trust all of my captains and trust their sense of judgment on the court. We finally developed a strategy and everyone from freshman to senior understands what we aim to accomplish. In terms of talent, we picked up guys who can catch especially since we only had two good arms that were at 100%. Everyone worked together as a team no one tried to be the “hero” or played outside their game.

KB – What are your goals for both yourself as an individual, and for your team for the remainder of the 2014-15 season?

TS – For me, my goal is to become a better player. I’m always looking to get better in some aspect of my game. There’s always something I can improve on. I also want to be a better leader and show my team that we can be great. Our team goal is simply one thing: To make a statement in the league. Let everyone know that BG is no pushover and every one of my guys especially my older guys that been through it want to prove that.

KB – You have been in the league for several years, what teams in the NCDA are your favorite to play and why?

TS – I love playing DePaul because they are a team that just loves the game and even after we play against other teams, they remind me of how fun dodgeball is and why I love the game. Also after this year, I will enjoy playing the other teams in the league as well because now we can compete. Being in the league for a while, I can’t count how many times we have been targeting practice to other teams. Now we can compete and that’s when it’s the most fun.

KB – Lastly, you have a few years left as a member of BGSU Dodgeball, but as of now, what would you say has been the most memorable moment of your dodgeball career?

TS – My most memorable moment is when we upset Kentucky my freshman year when Kentucky went to the national championship. It was huge to our older guys that were freshman at that time. After that, I just wanted to get better as a player. I’ll never forget that moment.