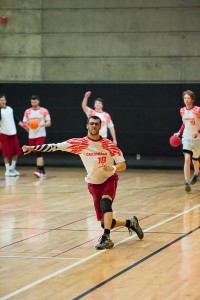 The Baller of the Month for March is Kyle Foster of Saginaw Valley State University. Kyle played outstanding for SVSU as he helped lead his team to two upset wins and nearly the title at the Michigan Dodgeball Cup. Kyle has long been a key player for his team and this honor is well deserved and perhaps a long time coming.

Colin O’Brien: First off congratulations for being named Baller of the Month. You have been a key player for SVSU and a well known player throughout the league for several years now, but you as well as your team really had a great tournament at the MDC. What do you think was the reason for the both your and SVSU’s success back at the tournament?

Kyle Foster: Thank you, it’s and honor just to be considered among the league for this recognition. When I look back to MDC my personal motivation going in was purely that this was my last go around. This was the last time I walked into MSU to compete for that title and I knew no matter what I was going to leave everything I had there that day. On the other had the team was there to prove the doubters wrong. I’ve been saying it all year before every game. It’s no secret that we haven’t had the greatest year against other Michigan schools and that everyone counted us out at MDC and I think we used that to fuel the fire. I try to remind everyone on the court about the guys next to them because no one can play this game alone, it doesn’t matter who you are or who you’re playing, you need that guy or girl (shoutout to Autumn)with you on the court and I think we really keyed in on that at MDC.

COB: You have always been known as a great catcher, but what really impressed me is your ability to catch at close range. You caught myself two times in the first half of our game at the MDC at a range that I would throw again 10 times out of 10. What would you say is the key to your catching ability both in general and in close quarters?

KF: Those close range catches always pump me up mid game and I’m sure I taunted you immediately, but what would the game be without that!? In general I look at my catching with the pure fact that I know my arm isn’t always going to be there and I better have other skills or these young guys are going to run me off the court. I made it a point when I first started dodgeball back in 2010 to work with Jason Stein who was one of SV’s top catchers back in the day and he really helped me develop that skill. As for close range I just think that it really doesn’t matter how close I am you’re ball isn’t going to be going any faster, it’s not going to hurt any less, it’s just going to get their quicker.

COB: As you’ve said SVSU had not had the best season against the Michigan schools but was able to knock off MSU and CMU at the MDC. What are your expectations for your team going into Nationals knowing that there’s a good possibility of having to play all three Michigan schools on Sunday in order to win the championship?

KF: I think expectations are high, we have a lot of young guys this year and this will be the first time many of them have played so much in one weekend but I think we proved to everyone and ourselves at MDC that we are a team that won’t back down. Statistically SV has always played well at Nationals and I don’t see this year as being any different. I try to remind the guys that it doesn’t matter who lines up across that court come April if we stick to our strategy and play our game like we know we are capable of. Like I said for some of them this is our first nationals, for others it’s our last and I know every player who steps on that court will give it their all. I said it right away in our huddle after that loss to GV at MDC, everyone watched them hoist that trophy and not one player wants that feeling again come Nationals.

COB: I agree that you guys always seem to bring it both for the MDC and for Nationals and that’s the right mindset to have going in to the tournament. What are your favorite teams to play against and what team would you really like to face at Nationals that you have not played already this season?

KF: Personally I always love to play Grand Valley, MSU and CMU solely because I know so many of the guys personally. While we may yell and scream on the court the handshakes afterwards are always genuine and the games are always competitive. Other than that I enjoy playing “newer” teams like Towson, those teams that always make it close but seem to just fall short. Im always excited for Nationals because we do get to play teams we don’t always get to, teams like Kentucky or Maryland due to the fact that we are so far away geographically. The one team I’m looking forward to playing is Ohio State since we don’t get to play them often but it is usually a competitive game against them, plus as a Michigan fan I always love to bust a buckeye.

COB: I would have to agree with all of those picks. Michigan games are always a good time and who doesn’t like beating Ohio State right? As a catcher, who is your favorite person(s) to have throw at you?

KF: While I have only played JMU a few times in my career I always enjoy playing them because they usually have a lot of guys with strong arms. Making catches against guys with strong arms is always a better feeling and pumps up the team. My one favorite person to catch though has to be Michael Riley from CMU. I’ve known Riley for a few years now and I always like to give him crap about getting old and how he has no arm anymore, which makes it all the better when I catch him.

COB: SVSU is known to be a very tight-knit group. What are some of your favorite memories of your dodgeball career both on and off the court as a member of SVSU?

KF: Without a doubt I’d have to say that winning the national championship at home in 2012 was the highlight of my on the court experience. Being able to hold that trophy up in front of friends, family and the university president was a huge honor. Playing last year in my first all star game was also an amazing experience, I remember starting the game holding a ball with every SV players autograph on it and I looked to my left at Cody and I said I’m getting the first kill. On go I instantly sprinted to half court and hit someone in the shin then did a nice little #1 taunt. It was a great experience and I can’t wait to represent SV again this year in the all star game. Off the court there are way to many memories to even begin to figure out where to start. This team is not only my friends but my family, I don’t think a day goes by where I don’t see or talk to some member of this team. One of the greatest memories though would have to be last year at our team banquet when the team voted me as team MVP. It was a huge honor that our team valued my play so much to give me this honor and one that I have tried to live up to this entire year both on the court, at practice and whenever I speak about our team.