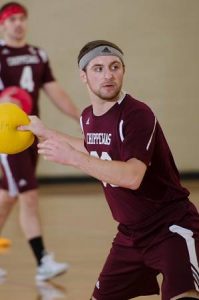 The Baller of the Month for June goes to a recent graduate from Central Michigan University: Jacob Leski.  Jake was a top performer on a CMU team that finished as national runner-up for the second straight season.

Jake finished up his career at CMU with a stellar performance at Nationals (the championship game in particular).  Without a doubt he leaves behind a legacy as one of the most impactful catchers in the NCDA.

I had the pleasure to interview Jake on a number of topics, including his on-court strategy, favorite dodgeball memories, and his future plans.  Take a look at our interview below:

Kevin Bailey –  Congratulations on winning Baller of the Month, Jake.  My first question for you is this: when you first joined the CMU Dodgeball Club several years ago, did you anticipate that you would ever get an honor like “Baller of the Month”?

Jacob Leski – Thank you my friend, I appreciate the honor. Not once did I ever think I would be a BOTM. On CMU alone I was surrounded by incredibly talented individuals who have yet to be chosen, so I figured my odds were small. Now that I have been chosen, I can’t thank my teammates enough for being my brothers on and off the court over the last four seasons.

KB – Over the course of your career you developed into quite an extraordinary catcher.  Can you give a little bit of insight into the mindset of a dominant catcher?  What caused you to develop those skills in the first place, and how has your skillset evolved since you first began playing for CMU?

JL – Once you’ve developed that reputation as an elite catcher, good teams prepare ahead of time and do whatever they can to avoid you. You have to create your own opportunities to make plays, which involves playing a more risky style of dodgeball and tempting players to throw at you, making them think they have the advantage. Central has had the reputation of being a catching team for a long time and that is well deserved. Throughout my four years on the team, I have been surrounded by phenomenal catchers, thus providing me opportunities to learn from them and model their style of play. By my third season, I learned my true role on our team, I wasn’t a thrower, my team needed me to be a clutch catcher and I built off that role up until my final game.

KB – As most people who follow the NCDA are aware, CMU was not at all a successful team when you first joined the club during the 2012-13 season.  Tell us a little bit about how the leaders of your team were able to get CMU back to its winning ways.  I know that during your stint as the club president you made a huge impact.  Can you explain how the leaders of CMU’s team were able to create a national title contender so effectively?

JL – The key word here is humility. The leaders of the team at the time were humble enough to let others come in and try to rebuild the program. That is not an easy thing to do, especially since this team was their pride and joy, but they knew something had to change. I appreciate the kind words. We recruited harder than ever before. We made the 2013-14 recruiting class feel special and that we were actually interested in getting to know them, we essentially established a brotherhood within our organization. That recruiting class has now been to two straight National Finals and only lose three players from their current roster. If my memory serves me correctly, they make up 12 of the 15 starting spots on CMU’s roster. It’s safe to say expectations are large once again. We also established a firm, but effective executive board that held everyone accountable for their actions on and off the court. This truly created a winning atmosphere. Also, our goal all season was to prove we had the talent to compete with anybody in the league.

KB – I always have to ask this question during my interviews: Which teams in the NCDA did you most enjoy competing against?

JL – You already know the answer to this question! Anytime you get to go up against another Michigan team 9/10 times it is going to be a cutthroat match and those type of competitive matches never get old. However, if I had to choose just one team, I would say Michigan State because I had the privilege of practicing with them all season long and became close friends with many of them. Even in our semifinal game against them we were exchanging friendly banter with one another and doing 1v1 matchups, which is unheard of in a game that carries so much significance.

KB – This might be a difficult question to answer, but can you give me one specific moment that stands out to you as the best memory from your collegiate dodgeball career?

JL – This will come as no surprise to my fellow Chippewas, but our victory over GVSU at our home tournament a few weeks before Nationals 2015. We had just broken JMU’s undefeated record, Grand Valley was on a 41 game winning streak and needed to beat us to break the all-time record. Our home crowd was unlike anything I have ever seen to this day, there was nowhere to sit or stand. Prior to the tournament we had advertised the hell out of it and it was great to see everything come to fruition. That victory was also the final checkpoint for us, we were still being doubted by many notable members of the league and adding in the fact that it was a shutout was amazing. For me personally, it was confirmation that all of the hard work I had put in over the past two years had finally paid off.

KB – What were your goals/aspirations in terms of your career?

JL – That’s a great question Kevin. Although we lost in the National Finals twice, I haven’t forgotten that we made it to the National Finals twice. That is no small feat, in fact I know the majority of the league would love to have been in the same position we are/were in. Also, when I took over some of our leadership roles many years ago, I knew we had the talent to be a competitive team, never did I imagine that we would return to be one of the most dominant teams in the league for years to come. This sport is far bigger than I am, which is why I am very satisfied with how my college dodgeball career ended up. Yes, I managed to rake in two All-American nods, but I could not have earned a single one without the help of my teammates, the award in itself is more of an acknowledgement of the team as a whole, I was just lucky and loud enough to get each one.

KB – As a recent graduate from CMU, I have to ask, what are your plans for the future.  And on a much lighter note, now that your NCDA career is over, what are the chances that we see the one and only Jacob Leski back on the court playing either Elite Dodgeball or Sky Zone Ultimate Dodgeball?

JL – I have been hired to teach special education at a high school in Indiana, near a university in fact. Might just give it the old college try and start a team there and become their coach. Only time will tell.  My goal is to teach for a long time and then go into an administrative role down the road.

You know, I told a lot of people at Nationals that my dodgeball career was over after my final game on Sunday, but as time passes the more I think about returning to the game. If I really had to put a timetable on it, my return depends primarily on what teams are available, are interested in me joining their respective squads and would like to have someone with my personality join their team. It would need to be a great fit for both parties.

KB – Once again, congrats on being named Baller of the Month.  Any last comments?

JL – Thank you, it is a great honor and a spectacular way to end my NCDA career. A big thank you to all of the friends and acquaintances I have made throughout my four years in this league. You have given me something to become passionate about and I am very grateful for this league and most importantly, all of you.