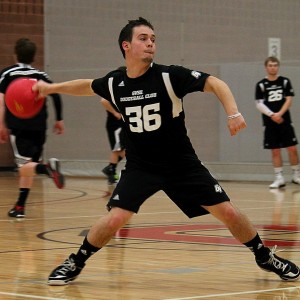 The Baller of the Month for February goes to Trevor Nordberg of GVSU.  Trevor led his team to an MDC title in February, in the process proving why he is one of the most dangerous players in the league.  Here is my brief interview with Trevor:

Kevin Bailey: First off, congratulations on winning Baller of the Month.  You have garnered quite a bit of attention throughout the league for how well you have played during the second half of this season.  What would you say are the main reasons for your strong performance?

Trevor Nordberg: I believe it is a synergistic combination of things. For starters, this is my last year in college. I decided early on in the school year that I wanted to go out strong and I wanted to lay everything out on the table. Secondly, seeing some of the other teams step up their game, notably CMU and Michigan State, has really motivated me to step up mine. The last and I think biggest factor comes from the loss of crucial players from last year, especially Mark Trippiedi. With these large gaps to fill, it has pushed me to change from a supporting role to a key leadership one. I have become very comfortable with this transition and love playing my part on the team.

KB: GVSU is yet to lose a game this season, and your team currently sits just two wins shy of the longest win streak in the history of the NCDA.  Can you talk a little bit about the challenges that you experience as a leader on a team with such a large target on its back?

TN: I would have to say one of the biggest challenges is staying focused. Because we have a target on our back, no game can be treated as a throwaway. Everyone wants to beat us and I have seen the tenacity and desire to win from other teams when they play against us. It gets tiring, but no matter how exhausted I get or how mentally draining it is to play, many times back to back, against teams whose main goal is to see us lose, I have to make sure to match their intensity and stay focused both for myself and the team.

KB: As a senior player for GVSU, what are your expectations for both your team and yourself as an individual for the rest of this season?

TN: I want to see us go undefeated the rest of the season and win nationals. This is my last year and I want to say that I helped lead GVSU to one of the best seasons it has ever had. That is my goal. I want to see the team continue to be as cohesive as it has been, and I will continue to push myself and do what I have been.

KB: You have played a variety of teams throughout your four-year career at GVSU.  In your opinion which teams are the most enjoyable to compete against and why?

TN: I love playing against CMU. They are an awesome group of guys. Honest on the court and very serious and competitive. They have posed the largest threat so far this season and it is not over. Michigan State is also a great team to play against. Colin O’Brien is, in my opinion, one of the most difficult players to get out. He rarely makes mistakes and with his supporting crew of dangerous throwers like Noe and catchers like Lieblich, every game against them is tense and the way competition should be. We have yet to play James Madison, but I cannot wait for the CMU tournament when we are finally pitted against them. Going head to head with some of the hardest throwers in the league is something I have been waiting for all season.

KB: I know that you still have a month left in your collegiate dodgeball career, but as of right now, what have been the most memorable moments of your career both on and off the court?

TN: I have so many memories. Dodgeball has been the cornerstone of my college career and is something I am extremely proud to say that I have participated in. Off the court, our team has had some amazing bonding experiences, and I have met some of my best friends through our organization. The parties we have had after nationals and MDC are always fantastic leading to all types of debauchery. On the court, one of my best memories is when we first faced JMU two years ago in Kentucky at Nationals. It was their first year as a team and they beat us, which gave us a serious and much needed wake up call. But, I have got to say that hands down my most exciting time on the court was my freshman year at SVSU for nationals when we faced CMU. Hadwin and Peters probably remember the game. I have yet to play in a match that even comes close to how intense this one was. I do not remember a count for the shot clock the entire game. We were trying to kill them, and they were trying to kill us. It was throw after throw after throw with almost no time in between. I would love to see that ferocity show up at this year’s Nationals.