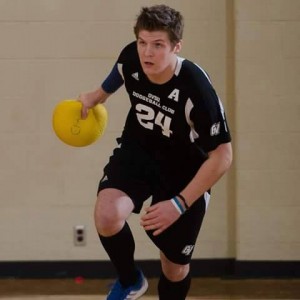 Our final Baller of the Month for the 2014-2015 season goes to a cornerstone of the Grand Valley State University dynasty, Dylan Fettig. Dylan has been apart of this club since 2010, the final year of Grand Valley’s four year streak of winning the National Championship and had the pleasure of ending his career with another one. What might be a surprise to many is that this is Dylan’s first Baller of the Month award. Read what this All-American has to say:

Jacob Leski: Dylan, congratulations on your first ever BOTM award, just another award you can add to your long list of achievements from your time in the league. You have been an instrumental part of Grand Valley’s dodgeball team for many years now, how does it feel to end your long career with a national championship?

Dylan Fettig: It is definitely bittersweet. Winning a championship is a great feeling, we all worked hard and it is awesome to see all of the work pay off in the end. There is always that worry that once you step down as the leadership of something that it will crumble, but with the group we have running the club next year I am confident that they will be more than capable of keeping GV running strong.

JL: Now that you are an official alumni of Grand Valley Dodgeball, what season was your favorite to be a part of and why?

DF: Honestly that is a hard question. There are different things that I liked best about each year that I played. My first two years were the most interesting because I was new to the sport, I was figuring out my strengths and weakness as a player and finding my role on the team. I am probably the most proud of the middle two years of my career because that’s when I was president of the club and worked with the rest of the leadership to improve the way Grand Valley was viewed in the league. The last two years were the most fun because we have really amped up the number of games that we have played.

JL: What would you say is the primary reason GV has been dominant year after year? What is the key to their success?

DF: The way I see it there are three main reasons Grand Valley has been dominant year after year.
First off we take the sport seriously. Most of the recruits that we get each year tell us that they kept coming to practices because of how competitive our club is. If you think about it, these guys are just getting out of high school and are looking for something to fill the competitive void that they now have from being done with high school sports. Some people would argue that people play dodgeball “just for fun” so it should not be so competitive, but in my own personal experience I have the most fun during games that are highly competitive.
The second reason we are successful each year is because we have extremely talented players on our team. I understand the question was basically “how do you get extremely talented players on your team?” but the answer is to have extremely talented players on your team. When you have great players on your team everyone else who plays against them in practice will have to raise their level of play in order to compete against them. One thing that developing teams can do is encourage their alumni to come and play at practice to increase the talent level and help teach the new people.
I will keep the last reason short and sweet, practice time is important. We practice three times a week for 2 hours, it is just about the perfect amount to not completely ruin your arm.

JL: You have had the pleasure of playing many teams over the years, what team was your favorite to play and what team was the toughest to play?

DF: I just looked it up and I am glad to say that I have played against 26 different teams during my time in this league. As I already stated, my favorite games are competitive games so it is always fun to play our in state rivals CMU, MSU, and SVSU. My favorite game is still the GV v CMU 2011 championship match even though we lost, look it up on YouTube, it was crazy until the last second!
I am sure the records would indicate that the toughest team to play against is SVSU. No matter what year, or who they have on their team, those guys always found a way to keep the game close against us. I know we lost to them 0-3 once, which was the first time GV was shut out and the first time we lost by more than 1 point!

JL: You are currently running for President of the league, tell me why and what you would like to see changed. Also, what do you want the league to look like 10 years from now?

DF: I am running for president of the league because I have a strong desire to see the NCDA become a bigger and better organization. I just got my master’s degree in Public Administration, which focused on running nonprofit organizations. As president I would use everything I learned in my program during the last two years to help improve the league. I have high goals for the future of our league. I want to see us continue to expand, gaining teams to the west and south as well as strengthening the areas that we already have. My ultimate goal for dodgeball is to develop a pro league that the NCDA can be a feeder league for, this would increase the popularity and legitimacy of the sport, which in turn would significantly help the league grow.

JL: Thank you Dylan, I expect to see you around as usual due in part to your role on the League’s Executive Board and your love for the game. Have a great summer and congratulations on one hell of a career.

DF: Thanks again to the content team for selecting me and thanks to everyone else in the league for a great season!