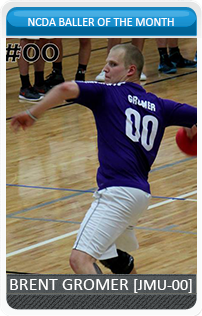 The National Collegiate Dodgeball Association’s June Baller of the Month is James Madison’s Brent Gromer.  Brent had a strong performance at Nationals 2014 in April, after recovering from an injury to his ACL and medial meniscus that kept him on the sidelines for most of the season.  In his three seasons in this league, Brent has transitioned from an unknown player, to one of the best all-around dodgeball players in the NCDA.  His strong performance at the end of last season earned him 1st-Team All-NCDA honors (Brent was the #6 player on the list, and the top selection from the East Coast Region).  Brent Gromer is very deserving of the honor of “Baller of the Month”.  Here is my interview with the star player from James Madison:

Kevin Bailey-  First off, congratulations on being selected as Baller of the Month, and a 1st-Team All-NCDA player Brent.  Your 2013-14 season was limited due to an injury to your ACL and Medial Meniscus, but you made a return to the court for Nationals and led JMU to the Final Four.  Taking a look back at last season, what were the most memorable moments for you?

Brent Gromer-  Thanks man I appreciate the nomination! The most memorable moments for me would have to be nationals and the practices leading up to nationals. We decided to do something different in preparation for such the big tournament and that was to have a smaller practice at least once a week where we could play at full pace, work on what we needed to work on. These practices tended to be a little more brutal which was exactly what we wanted and so it seemingly made our guys more focused on our game and more aware of what we needed to do to finally play as a solid unit. And of course nationals itself is the most memorable moment because I was finally able to play. I wasn’t cleared to play but when my doctor said I could run, that was the green light in my mind. But in reality, that being my most memorable moment is because of on the court and off the court. In the hotel, I have never seen our team bond more than they did this past April and the car rides get more and more fun every year. On the court, however, I could not be more proud of the team we took this year. Despite not being able to bring a few key players, we were able to bring a coachable team that exceeded our expectation by far. I personally could not be more proud of our freshman, Clark, who played his heart out every point he could get in. I distinctly remember him getting into one point against WKU I believe where he was the last player, dodged a team throw, and still managed to make a diving catch keeping himself in bounds. I live for those moments to see someone exceed anything we ever expected of them as Clark and the rest of our top 20 still managed to do.

KB- James Madison is considered one of the most talented teams in the NCDA.  After becoming the first East Coast team to reach the Final Four, what are your expectations for JMU next season?

BG- We always do appreciate when we receive the titles of “most talented team” or “strongest arms” but talent comes from playing as a team and we are literally one little push away from being able to play like a team as Grand Valley and Saginaw do. I guess one expectation I have going into next year is for our team to keep climbing as we have done in the past years. I want for us to take the outcome of this years nationals and have it fuel us going into next year. The second of my expectations is for us to go into next year not submitting to any team. We suffered several losses to Grand Valley this year but 2 of them we were completely destroyed and that has a lot to do with us accepting defeat after a couple lost points. I’m guilty of this too but we have a tendency to get sloppy as games stop going our way and we play with the mindset of numbers winning battles, and when that starts to fade and we get into those 9 on 6’s, or what have you, we tend to sort of stray away from that fire we have at the beginning of every point. If there’s one thing we do expect of ourselves next year, it would be to keep that fire for a whole 50 minutes and to not accept such brutal losses ever again because our team would agree, those were quite embarrassing considering we won against GVSU one time at last year’s nationals.

KB- JMU is a team that is known to travel often. In your three seasons in this league you have faced a variety of teams.  Which team is your favorite to compete against? And are there any teams that you have never played that you really want to face before your graduation?

BG- I’d have to say my favorite team to play is hands down Kent State because whenever we play them it is a “kill or be killed” mentality and I don’t think a single player from either of those teams walks away not still bloodthirsty, and I thoroughly enjoy that. Playing dodgeball angry is the best. I tend to do that sometimes, even in practice. So being able to show anger towards another team is so much more enjoyable. It’s a love/hate relationship with them.

A team that I really would like to play is Sienna Heights. I know they’re still a developing team but I’d just love to have the chance to play competitively against Mike McCarthy, he has to prove to me that he doesn’t get out as many times as he did in the All-star game. Easily 10 times!

KB- Hopefully you get a chance to face McCarthy’s team someday, we all know he will be in the league for 10 more years.  Anyway, you began your career for JMU in 2012, during the team’s first season.  Since then you have developed into one of the best all-around players in college dodgeball.  What do you think caused you to emerge as such a high caliber player, and what are your personal goals for the future?

BG- I played baseball since I was 3 and I feel like the better dodgeball players come from a baseball background. I know there are plenty of athletes in this league who did not play baseball but I feel like that is what got me to where I am. I played outfield and always loved watching a good throw just soar if and when I threw somebody out. That alone is what caused me to work on my throw. In terms of the rest of my game, I honestly just take my time in dodgeball. I don’t rush stupid throws and I try my hardest not to go for stupid catches. When it comes to big games I try to tell myself “get at least one person out if you are going to get out.” Although that may not always happen, it makes me feel okay that if I’m going to be on the sidelines so is someone from the other team, causing for the numbers to still be even

My goals for the future are to really work on my catching. I consider myself an alright catcher because I am selective but I really want to become a Joey Cardella at catching. He knows where every ball is at all times and has a 6th sense when it comes to catching every single throw. Quite impressive if you ask me. Another goal I have is to just keep working on my arm. I want to be able to throw hard with no pain. Ask my team, I take 5 ibuprofen before every practice and hope my arm doesn’t fall off. My goal with that is to be less stupid with my arm (very hard for me to do) and to maintain velocity at the same time

KB- Alright, well congratulations again on earning “Baller of the Month”, and good luck to yourself and James Madison as we inch closer and closer to the start of the 2014-15 season.  Any last comments that you would like to make?

BG- Thank you very much. Again, I appreciate the nomination especially since I was out for a good chunk of the season. It does mean a lot. I would like to say that I cannot be more proud of my team for what they did this past April. As weird as this sounds, missing the few great arms that we were at nationals could not have turned out any better. The extra 5 guys that we took knew how to play and they played so well that it’s going to be a strong competition this next year to earn a spot on the top 20. Our freshmen stood out like no other and really proved themselves to be damn good dodgeball players. Way to go fellas!