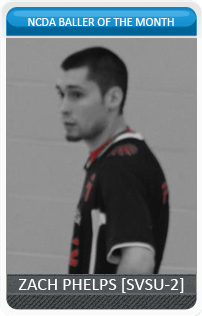 This month’s Baller of the Month helped lead his team to a second place finish in the Michigan Dodgeball Cup, as well as winning the BEAST II at James Madison. Phelps went from being a complementary player on last year’s National Championship team to one of the stars of the #4 ranked team in the country. Zach has a good power arm, can catch, and more importantly is one of the leaders of a surprise team and one of the most improved players in the country.

Sam Hiller: Last year you were a bit of an unknown player for the Cardinals, and this year you’re turning into a star. How have you developed from a good player into a great one?

Zach Phelps: Last year was my first year as a part of the NCDA and everything was unbelievably surreal. Luckily, I had a legend in Bryan Janick on my team who took me under his wing and taught me the rules. Since that first game, I started working harder on my catching and shadowing because I knew that I had a crappy arm so I decided to play to my strengths and slowly incorporate my throw into my list of abilities. During the off season I had a lot of down time which allowed me to take a ball and work on my throwing so I could fill the shoes of some people that we had lost after nationals last year, and that’s about where I am today. Oh yeah, I also did a lot of cardio exercises since that is rule #1.

SH: You traveled all the way to Harrisonburg, Virginia, and beat #1 Kent, #3 JMU, #9 Towson, and #12 Miami, and barely lost to #10 WKU. This is coming off nearly winning the MDC by beating #5 MSU, #11 CMU, and just missing a win against #6 GVSU. How confident are the Cardinals right now that they can repeat?

ZP: Travelling all the way to JMU was definitely a journey but the trip is half the fun. The BEAST lived up to it’s name by absolutely draining everything out of our team and I tip my hat to Chris Hess and JMU for their hospitality and doing an amazing job with the tournament. As for the MDC and repeating, we are still sore about the two controversial calls at the end of OT with GVSU, but we are using that as motivation to keep the National championship trophy here at SVSU.

SH: You guys have been in five overtime games (six if you include your JV win over GVSU’s JV), how do you feel this helps your team grow and be able to win a title?

ZP: Honestly, I would be happy if I never heard the word overtime again. The rest of our top six would probably agree with me on that too, but man is it exciting. When looking at a couple of our OT wins, I remember that we went down two players and had to battle back by either making catches or getting kills in the neutral zone. Those wins show that our team has guts and a determination to not only survive, but to win. When everyone sees that happen it inspires them to want to improve their game and abilities so that they can be apart of a match like that. But seriously, I sort of like OT matches because they’re like a game of chess, make your moves/plays wisely.

SH: SVSU had a rough start to the season (3-3-1 record to start) but since then you’ve gone 7-2-2. What have you guys done to turn around the season?

ZP: There was a first half of the season? We sometimes like to think that the first part of the season never really happened, except for beating GVSU that did happen. When we returned from break, things started to get serious with the MDC approaching and we wanted to work really hard to bring the cup back home with us. Well…that didn’t happen but it’s alright because we have been using that loss to keep pushing ourselves to get better. Especially at practice, I’m starting to see a lot of kids stepping up and making plays that they never would have made earlier this season and I think that that attests to our growth as a team. Also, we got back to the basics of team throws and communication which has really kept our number of players getting out low. Other than that, we are a rather young team compared to the SVSU’s of the past and are continuing with the growth of the program.