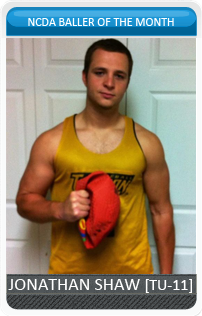 Jon was a bright spot for a Tigers squad that was one of the most talked about teams, despite missing some of it’s key weapons at Nationals 2013. He leads not just through his words, but his play, and he’s got Towson on the right path towards becoming a dominant team on the East Coast. Shaw was an All-Star for the Brave Little Toasters at Nationals 2013, and also made the All-NCDA second team. With those personal credentials and the fact that he’s guided Towson to a Top 10 finish in just their second NCDA season, Jon definitely is a Baller to watch for in 2013-2014.

Sam Hiller: Towson was missing some of their biggest guns this past Nationals, and yet you guys still went 2-1 on Saturday (wins over the Misc. team and UWP) and your only losses were to NCDA mainstays in CMU and WKU. How do you consider the way the tournament went for the Tigers?

JS: Nationals 2013 was overall an amazing experience for Towson University. It was not easy going in to this tourney for us, we were down 3 of our top 5 throwers including NCDA all star Joe Tobin, who was and will continue to be Towson’s number one thrower. There has never been more of an adrenaline rush for our program then our first game of the tourney against UWP. To be down 2 to 0 and come back to win the game 3 to 2 in regulation was exactly the start we were looking for.

However emotions quickly turned for the Tigers the next morning when we went up against CMU. I can’t describe how flat we came out of the gate. CMU absolutely dominated the entire match, and Wes Peters caught absolutely everything we threw at him. Needless to say the excitement we had after Friday nights game was absolutely diminished after the match against CMU. A win against the Miscellaneous team was a solid way to end pool play, but unfortunately put us up against WKU in the first round.

I had announced the WKU vs SVSU match earlier on Saturday with Raymer, and knew that this would be a hard match for Towson. Very similar upbeat playing styles, but simply put WKU outhustled, out threw, and out caught us. Not to mention that Felix Perrone was on absolute fire which didn’t help our chances much. Overall a 2 and 2 record is not bad, but definitely a little disappointment after all was said and done.

SH: What’s been your favorite moment in the first two seasons of NCDA play for Towson, either personally or as a team?

JS: There was truly no better feeling this year, then taking down VCU at the Maryland Round Robin for our first ever match win. It was kind of a surreal feeling knowing that in the future whatever success Towson dodgeball has, that we were the team to get our school’s first ever NCDA win. However it was the ending to the last game that truly makes this my favorite moment.

Up 11 to 0 against VCU, Towson was simply getting beat on point 12, and if I remember correctly VCU had around a 6 to 4 player advantage. With TU’s Justin Cohen and Dylan Levy leading the way Towson was able to work its way back, and it suddenly became both Towson’s and VCU’s first ever 1 on 1 battle. Literally 2 days before newcomer Jordan Haxton attended one of Towson’s practices, and he was an instant hit on the court with unreal blocking abilities and great court awareness. We invited him to this tournament and in his first ever match he found himself in a heart pounding 1 on l battle. With Towson on the shot clock Haxton threw, but was blocked by a VCU player. Haxton quickly backpedaled, but the VCU player sprinted his way throwing at him from point blank range. Jordan slid to the ground and made an unbelievable catch to seal a shutout win for Towson. Our players went absolutely bat shit crazy as we piled on top of Haxton jumping up and down, celebrating our first ever team win.

JS: There is an x-factor for Towson University dodgeball off the court and his name is Sean Smith. Not only is Sean a great player, but also he consistently is coming up with great ideas as to improve Towson Dodgeball. I sincerely mean this when I say that last year, we do not make it to Nationals without Sean. The amount of hours he puts into our Sports Club office and with the team is truly incredible and shows how dedicated he really is. Sean comes up with great ideas for recruitment such as attending our schools annual involvement fair, creating a Towson dodgeball club page on Facebook, flyers around campus, and more. I don’t care what sport club a person is a part of, you would kill to have someone with the passion that my man Smith does. And Towson dodgeball is truly lucky to have him as a part of our family.

SH: Since you’ve only had two years as an NCDA member-team, you guys have played less than half the teams in the NCDA, so I’m sure there’s some teams you’d like to play. What are some teams you’d love to face?

JS: Before I talk about the teams I haven’t faced, that I’d love to face let me say this: JMU will always be our favorite team to play. I think I’m correct that in lifetime matches Towson is 0 and 4 against JMU. And I do understand that when you don’t have a single win versus a team that you CAN NOT trash talk. But most NCDA teams that have faced JMU know that they are not slacking in the confidence/cockiness department. And they have the power to get under your skin very, very easily. With all that being said, JMU is an absolute great team with arguably the most depth of any team in the country. I personally feel that this will be the year that JMU and Towson solidify themselves as the east coast rivalry in the NCDA. Chris Hess is a very open minded and realistic captain. He is aware that Towson has every intention of dethroning JMU as the # 1 team on the east coast. I believe this will just add to the fire that Towson and JMU matches already have.

With that being said Towson has yet to face a real contender outside JMU. We did face Kentucky, but that was there B team. So schools like GVSU, MSU, OSU, and SVSU are all on my wish list for next year.

SH: And finally, we saw that you are turning into a great player for the Tigers. What do you see for yourself and your team this season?

JS: I’m a realistic guy, and I have no problem giving credit to other schools, especially when they earn it. I seriously mean this: watch out for Towson University next year. I am not going to give everything away. But our arms will be up there with the best. At Nationals next year anything less then a quarterfinal appearance will be a disappointment for us. I think next year will also be the first time that Towson University take down JMU. I am sure that JMU has something to say about this and all I have to say is simply “Bring it on.” To be the best you have to beat the best and that is exactly what we have to do vs. JMU.

We are virtually losing no one from last season, and with a solid core already in place I think Towson has the potential to finish in the top 5. I said it, top 5. I’m really not a cocky guy, but I really do believe we can be that good next year. Personally I only want to improve. I expect to increase my throw accuracy for next year, and working on my reaction time after a throw will be key to my success for the upcoming years. Playing with people in practice such as Joe Tobin, Luke Search, and Dylan Levy will absolutely be key to my personal success. But I am only one man, and I will take a bad game every time if it means a victory for Towson.