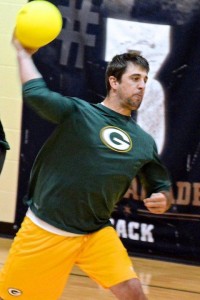 Aaron Rodgers led his team to the Packers Dodgeball Tournament Championship, wrapping up their three day Mini-Camp for offseason practices. Rodgers, along with teammates such as Mason Crosby, Randall Cobb, and Johnny Jolly, were able to knock off James Jones’ squad for the title. In the championship game, it came down to a two on two (Rodgers and rookie Lane Taylor vs Jones and Jordy Nelson) and Rodgers, who has one career reception for -1 yards, made a huge catch on Nelson to make it three on one before taking down James Jones. Now Rodgers, and his pseudo-rival have something in common, as former Packer Brett Favre has also played in a dodgeball tournament this season.

So my question to you Dodgeball Nation, is if you had to have a six man roster of current NFL athletes, playing with an NCDA Ruleset, who would you choose?

Here’s what I’ve got:

-Wes Welker, Broncos WR: Third in receptions per game last season, and is a little target

-Jay Cutler, Bears QB: Possibly the strongest arm in the league when it comes to velocity