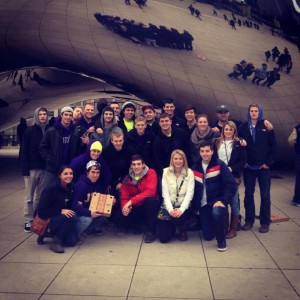 The Dukes of JMU finished their second season in the NCDA with more overall success than they did in their first season.JMU started their season at the Towson Throwdown going 2-0, with wins over Towson and University of Maryland. Both games ended with a score of 5-2. The Dukes dominated both teams easily, and they left feeling confident about the rest of their season.

Next for the Dukes came the UMD Tournament. Here, they beat UMD again, Virginia Commonwealth, and University of Kentucky, but lost to Kent State. After losing to the Golden Flashes 3-2 in overtime, JMU came back to crush the Terrapins 6-0. Their next match against Kentucky was a sweep, but not without its controversy. Kentucky chose to forfeit the match due to displays of unsportsmanlike conduct, giving them their only loss of the season until Nationals. JMU finished their day taking down in-state rival VCU with a final score of 9-2. At the end of the day, The Dukes left with their record sitting at 5-1, looking to finish the fall semester with The Battle for Virginia with VCU.

JMU swept the gym of the Rams taking the Battle for Virginia 12-0. In standard JMU fashion, no game in the match was close, JMUs shot clock never going down to a ten second clock during the entire match.

Coming back in the spring, the next step for Captain Chris Hess and the rest of his Dukes was the trip to DePaul for the Chicago Dodgeball Open. At the Chicago Dodgeball Open, JMU started out their day by losing 3-1 to Grand Valley State, the team that would eventually become National Champions. Unfortunately for DePaul, they were next up on the Duke’s schedule. They were taken out at their own gym in spectacular fashion losing 5-0. Up next on JMU’s docket were the Spartans of Michigan State. This match went down to the wire, with JMU winning 2-1. The Dukes finished their day taking out Moody Bible Institute 4-1. On their way back to Harrisonburg, JMU had a record of nine wins, two losses.

After a month off, JMU held their second annual tournament in BEAST II. Their schedule held the reigning national champions in Saginaw Valley State, the Hilltoppers of Western Kentucky, are-match with Kent State, Towson and Miami (OH). JMU started their day with a tough battle against Towson winning 3-0. Though they didn’t lose a game, this is the closest match these two East Coast schools have ever played against each other. Up next, JMU took down Miami (OH) with relative ease 5-1. Unfortunately, this is where the fun  briefly stopped for the Duke’s with Saginaw Valley up next. In a tight game, the reigning National Champions took down the host school 2-1 in overtime. Coming back from their loss JMU took out Western Kentucky 4-0. After a great comeback, the Duke’s ended their day in disappointment, losing to Kent State 1-0. Up next for JMU: the BGSU invite.

Before heading to Nationals, JMU headed up to Bowling Green State. Both of their games, one against BGSU and a re-match with MSU, went into overtime. Thankfully for JMU they came out on top, winning both matches 3-2. This ended  the Duke’s season with fourteen wins and four losses

Up next for the Dukes: Nationals. In group play, JMU handled business as usual, taking out Northwestern State University of Louisiana (NSULA) 9-0 on the first Friday match in Nationals history. Getting a chance to sleep in a little later than most teams, the Dukes woke up on Saturday ready to go, winning over Miami (OH) 8-0. In an epic rematch, JMU took out the Lakers of Grand Valley State 2-1. Most critics would say this game was a disappointment, with JMU playing outside of their normal fashion and slowing the game down to a snail’s pace. Taking the win as what it was, the Dukes came out on top of their pool with a 3-0 record. On Elimination Day, their first match was against DePaul which they handled easily, winning 5-0. However, JMU lost in the quarterfinals after competing against an angry GVSU squad, who exacted revenge and won the match 4-1.

For the second straight year, JMU was taken out in the quarterfinals of Nationals. What does the future hold for this team? Chris Hess is stepping down as the captain of the team, letting Ben Sizemore take over for next year. This team is on the map with a huge target on their back. The raucous team from Harrisonburg, Virginia quickly made a name for themselves in the dodgeball community, but, now, they have to prove that they can stay consistent in the 2013-2014 year.

4 thoughts on “A Year in Review: James Madison”