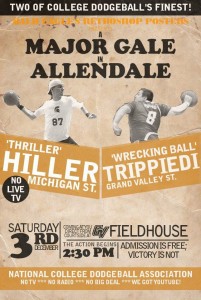 Traditional powers clash on December 3rd when the #2 ranked Michigan State Spartans head into Allendale to take on the #4 ranked Grand Valley State Lakers. The Lakers are 4-0 in the young season, having already beaten arch-rival Saginaw Valley State twice. Michigan State is 5-1 and recently won the MSU Invite and beat Big Ten rival Ohio State. The winner of this match may be in the driver’s seat towards getting a good seed at the always important Michigan Dodgeball Cup, seeing as the winner will be the highest ranked Michigan team going into the new year.

The Spartans have never beaten the Lakers, but this could be their best opportunity yet. Senior Ian Childs says We’ve got a lot of returning talent this year. We’re motivated to win. This season is the last chance for our seniors to win a title and the road to the title goes through GVSU.” Michigan State’s Zach Bauer agrees with Childs, saying that “GVSU is a good team and they don’t make many mistakes. It is important for us to play to our potential and minimize any mistakes. We have the ability to win, we just have to show up and play.”

Grand Valley hasn’t played Michigan State in their home gym since 2009, so it should be interesting to see how MSU does on the road in a hostile environment. The Spartans have had some trouble on the road in the past, and GVSU has played phenomenal at home throughout the history of their program. The Lakers are trying to build off a season where they won the Michigan Dodgeball Cup, but lost in the National Championship game in a thriller to Central Michigan. After losing players like Jimmy Stokes, Caleb James, and Greg Trippiedi some thought this may be a rebuilding year for Grand Valley, but sophomore Mark Trippiedi has a solid team that has already won the Bowling Green Invite. The Lakers expect to be there for a chance at a 5th National title in April. GVSU and MSU will also have a JV match, which could shed some light on the futures of these two programs. All eyes in the dodgeball world will be on the Grand Valley-Michigan State duel for this match with huge National implications.