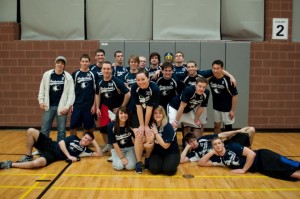 After spending the majority of the 2012-13 season ranked #1 in the nation, Kent State made it all the way to the national semifinals before being ousted by national runner-up Michigan State. The Golden Flashes played a plethora of regular season matches, reaching a total of 28 before the national tournament in Kentucky. For those wondering, the next closest was James Madison at 18. Recently, I sat down with the big boss man of Kent State, Dan Shackelford to talk about last year, the summer, what he expects out of this year, and their new promotional video for this upcoming year.

SS: Alright, so first question: Kent State was the #1 overall seed heading into elimination day at nationals, but lost to the eventual runners-up in Michigan State, what happened?

DS: I believe Kent had the talent to take the match; we just unraveled with our on-court communication. The first point was going great; we were taking them down with team throws and playing smart. A few catches were thrown and everything seemed to come apart. We also haven’t beaten Michigan State since before I joined the team in the 09-10 season so I think we all were feeling a lot of pressure facing off with them in such a big match.

SS: Over the summer you guys were kind enough to host a few summer dodgeball events where a ton of people we’re able to come to Kent to play. What was your favorite experience on the court and off the court from those events?

DS: My favorite on the court moment was probably a head shot that Shadeed received from a Kent state alumni, Kyle Cathcart. Shadeed was standing in the middle of everyone and the throw came from wide-right. Shadeed took his first Kent fun dungeon face shot like a man. My favorite off the court experience was probably just seeing all of the people from these different teams come together and party. It is so refreshing to see just how much the league has changed and how players from competitive teams are getting so close. We kind of just decided to try and get some players to come to Kent to ball because we were bored. We had no idea it would blossom into such a great time.

SS: So you guys have already had some time this semester to start practicing for the upcoming season, how’s the new crop of talent looking?

DS: We had our first open dodgeball this past Friday. There was a large turnout of greenhorns but not quite as many as we have seen in past years. Usually we have about 80-100 people packed into the gym for the first Friday. I’d say we had about 50-60 this time. But, the quality was much better. Even the smucks were picking up the pinch by the end of the day! We had our first closed practice this past Tuesday. It’s something new we added this year to the program that Camden and I are really excited about. We gained access to hardwood for two hours a week! Typically, we just play for three hours every Friday in an auxiliary gym that has semi-soft flooring, rounded walls, and is very wide. It’s so much fun to play in but it’s not an accurate simulation of NCDA dodgeball. We’re hoping this addition can help us better prepare for matches.

SS: Sounds awesome. When do you guys anticipate having your solid 15-20 players set for the season if you don’t already?

DS: Tough question. I would answer that our roster is always open for changes. As of right now, Cam and I have a pretty solid idea of the twenty players that would play if we had a match tomorrow; although, those players are not entitled to their spot. As of right now, I’m not sure we have scooped up any freshmen that could compete for a spot on the roster, (we have only lost one senior) but I could be proven wrong come spring.

SS: Speaking of returning players, in your mind why does nobody know who Josh Sayre is? I certainly didn’t before this summer, and he almost took my head off when I came up to play.

DS: Josh has always flown under the radar for some reason. I don’t gloat to other teams about him because I love watching him get to turn heads from time to time. There were a number of times last year that he took over points. Cam overshadows his throw, but Josh only needs one step to get a HEAVY throw off. I believe he could be a top three player on any team in the league.

SS: Well I’m sure he’ll make plenty of noise this year. Looking forward though where do you predict Kent State ending the season?

DS: I’ve never felt stronger about a title run than this year. Everything is coming together. Our roster is stacked with seniors who have been traveling to all four corners of the NCDA world to play in near-constant tournaments. Our sophomore class is very strong, with a few players getting ready to explode this year. Not to mention that Cam and I now have a year of leadership under our belts and we have added this practice on hardwood. I’ve never been more excited for a season of dodgeball.

SS: Alright and my last question: celebrity crush then (growing up) and now?

Another bold prediction for a team to take home nationals next year! That makes it Kent State, University of Kentucky, James Madison, and Grand Valley State who all believe they’ll be kings and/or queens of the dodgeball world come April. In terms of Dan though, who could argue with loving Tara Reid growing up? Find me someone who can, and I’ll find you someone who has never seen an American Pie movie, The Big Lebowski, or Scrubs.