The National Collegiate Dodgeball Association has had ten editions of its national tournament. Eight titles have been won by the state of Michigan but the first two, the inducting tournaments, were won by The Ohio State University.  Most people seem to forget that OSU took home those titles, having been lost in the shadow that was and still is the dominance of Grand Valley. This begs the question, was it Ohio State the changed which caused their fall from the top of the mountain, or did they fail to keep up with the evolution of the league? To answer this question we have to jump into our time machines and figure out what was the league really like during its early years.

Things are much different now compared to the early years of the NCDA. The extremely organized systems teams employ now did not exist back then. Teams were more of a collection of individuals with talent. Current active players aren’t used to the form of debauchery these matches would bring. If a team is up seven players to two, or five on one, or some other similar situation, generally the team on the brink of elimination can just count itself out. I don’t mean to say that comebacks aren’t possible, because they certainly are, but they are neither as likely nor as common as they used to be.

Dave Manley, former player and still active dodgeball enthusiast took some time to reflect on how things were at Ohio State, and the NCDA in his heyday. “Since the inception of the dodgeball club at OSU, we were always about having fun and not so competitive. This held true at the start of NCDA and continues to be a weak point for OSU tournament play to this day,” said Manley. “The early teams in the NCDA were not nearly as competition based as they are today. I suspect this is due to the fact that most of the teams were just a group of people who played together for fun and heard about the tournament so they decided to go for fun. The championship wasn’t a driving force, like it is today,” he continued. 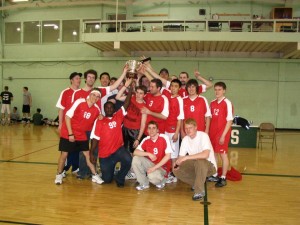 (The Buckeyes took home for the first NCDA championships)

Joe Spicuzza, another former Buckeye dodgeballer, feels almost exactly the same way as Manley. “I started playing during the second year of the NCDA. The culture at OSU was that of fun. We would all show up and it was a big free for all that just so happened to have sides. It was the game we played in grade school just at a fast pace and a lot more fun. I think the general mindset for the teams was that of fun, I don’t think anybody really took it that seriously in the beginning,” said Spicuzza.

So why the change? If the early teams like an Ohio State or a DePaul were in this just for fun, who or what caused such a dramatic shift in style? According to both Manley and Spicuzza, the answer was simple: Grand Valley State showed up.

“The switch was from a fast paced style of play to a much slower style of play and also from individuals on a team to playing together as one team,” said Spicuzza. “I think it was caused by the success that GVSU had with it,” he concluded.

The Lakers came in to the NCDA and caused nearly a paradigm shift in the way everyone saw things. After the Buckeyes had taken home the first two titles, GVSU decided they were here to mean business, not just have fun. This caused a lot of struggles for OSU.

“I have seen the sport evolved in many aspects,” reflects Dave Manley, “in the early days, the style of game play was very different. Dodgeball use to be a sport where individuals shined.”

Wait, individuals still get their fair share of shine nowadays, so how is this any different?

“It started every night with the draft, where the top 5 picks were always the same, people feared individuals and on person could swing the moment of the game drastically. In the old days, it was not uncommon for a single person to be facing 8+ people and still pull off a victory,” said Manley.

Based on the history lessons received from Manley and Spicuzza, practices weren’t even real practices back then. A more apt term to describe what happened has to be organized chaos. While most teams don’t have a set list of drills or anything that they do and spend most practices just scrimmaging each other, the organization level is much higher than it used to be. This change has caused some rifts in the mindsets between older and incoming classes in Columbus. 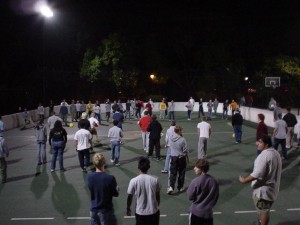 “We didn’t like the style and refused to change to it,” said Spicuzza. “I once palyed a match that only had one game get completed, that just isn’t fun for anyone. So we wouldn’t practice the slower paced game style and go to tournaments guns a blazing and would never quite reach the teams who played slow and worked as a team,” he finished.

Not surprisingly, this caused a lot of differences in the players. The older guys didn’t want to give up their fun-and-gun type of style, and the incoming players were looking to change whatever they needed in order to start winning matches again. The first thing that came was players learning how to pinch. When the league started, most if not all players would palm the balls. Grand Valley was one of the first teams that implemented that style of throwing which, along with their style and talent level, was the reason they kept OSU from getting back to the top.

The culture has slowly shifted towards the current style of play the top teams in the league implement which has caused a resurgence in the program. The Buckeyes had never seemed to be short on talent, they just needed to start putting it together as a team and not just a collection of individuals.

Slowly but surely, the club has started to come into a new version of their own. 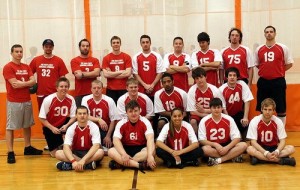 “I have been a coach for seven years and I have seen people do things in their first year that I ahd only seen veterans do… We introduce things such as grippy throwing, squat catching and overall sound tactics as soon as they show interest,” said Manley. “Actually, I remember when it [pinch throwing] was introduced at OSU and how that changed the game. Now it is rare that someone has not learned it within the first 2 years. Of course this is probably true for most teams,” he added.

So how is Ohio State fairing on the ten year anniversary of their first Nationals title? The Buckeye’s currently sit with a record of 8-6-1 holding on to the 6th seed in the NCDA. Are they ready to make a run at the title this year? Could they upset some teams who may not think OSU is return to the top of the mountain? Whether they do or do not, one thing is absolutely certain: they haven’t been the king of the hill in a long time, and the guys on the team now are doing whatever they can to get back.

One thought on “10 Years in the Making: The Rise, Fall and Resurrection of OSU”