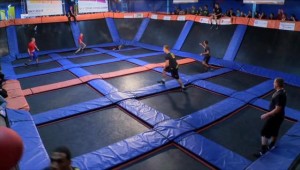 With the championship of the Ultimate Dodgeball Champioinship being aired (tape delayed) on FSN, qualifiers begin in early August at Skyzones across the US. For the uninitiated, Ultimate Dodgeball is called “3D Dodgeball”. You play at a Skyzone location on trampolines, and you can get a taste of how it’s played here. Here’s a list of locations in NCDA territory:

You can download the Tournament Info and the Rules as well.

The tournament is open to anyone 16+ and the cost is $50 per team. Your team can have up to 8 people, however only 5 play at a time. The qualifiers are held 08/01/13-08/04/13. If a team wins their qualifier tournament, then they are eligible to make the championship in Las Vegas.

The selection process is based on stats and popular vote. Of the 33 qualifying tournaments, only 8 teams will make it to the final tournament. Seven of those teams are based on statistics (win percentage, average game time, players left on the field at the end of the game), and the last spot is given based on a Facebook poll.

If any NCDAers compete in the Ultimate Dodgeball Championship Qualifiers, let us know!