There are three interesting events set for this weekend.  Grand Valley State will host the Gauntlet, Towson will host an East Coast tournament, and UWP will face off with SIUe in Battle of the Midway.  Below is a quick preview of the weekend’s events, along with picks against the spread.

The Gauntlet is poised to be one of the most telling tournaments of the fall.  Grand Valley will be the clear favorite, but overall it is a loaded field.  All four Michigan schools will be in attendance, along with Bowling Green State and James Madison.

The Dukes passed up the chance to play an in-region tournament, and instead decided to test their skills against the top region in dodgeball: Michigan.  It will be interesting to see how they fare against the Michigan schools, as they are slated to play all four during the event.  James Madison made headlines earlier this season by getting blown out at the hands of Towson.  They can right some of their wrongs by getting a few signature wins this weekend.  A win over any of these Michigan schools is huge, so JMU could head back to Harrisonburg on Sunday with plenty of momentum.

SVSU has been just a slight step behind CMU so far this season.  Central Michigan leads the series 2-1 as of now.  While these two teams do not face each other at this tourney, they may still swap places in the rankings depending on how each team competes against the others in attendance.

Michigan State had a rough start to the year, going 0-4 at their home tournament back in September.  The Spartans have not turned up at another event since then, so there will be a lot of anticipation to see how much this talented, young squad has improved.  The Spartans have an opportunity to make a statement and jump way up the rankings with a strong performance on Saturday.

Bowling Green State is a shadow of the Final Four squad that they were a year ago.  With that said, this is a great move by their captains.  Competing with some of the most talented squads in the country will only help this team improve.  BGSU may not be set up to win many games this weekend, but they will benefit greatly from the experience.  Also, don’t count them out, they still have some top end talent that can swing points in their favor in a matter of moments.

On Sunday over on the East Coast, Towson will host a handful of East Coast teams (but as stated earlier, no JMU).

Towson is the clear favorite to run away with this tournament.  They have positioned themselves as an elite team in the NCDA right now, with no signs of slowing down.  If any of the other teams in attendance (Virginia Commonwealth, Virginia & Maryland) can keep their game with Towson within a point or two, that alone will be a victory.  The Tigers will likely come out of this tournament with 3 wins, moving their season total to 12-0.

The other three teams are still a bit of a question mark at this point in the year.  VCU is arguably the second best team in attendance right now.  The Rams did earn impressive victories against both UMD (3-0), and UVA (4-2) last month.  VCU has only played in one tournament so far this year, so the lack of experience on their end may end up playing a factor.

UVA has not had a great year just yet.  The Cavaliers can make that all change over the next month, starting with a strong performance this weekend.  If they can grab wins over UMD and VCU that would be a big performance by them.

Maryland is another team that has yet to live up to their preseason expectations.  The Terps can also turn around their season starting with a win or two at this event.

For a preview of the Midway tourney, check out the preview article written by Erik Zander here.

Below are the picks against the spread for these tourneys: 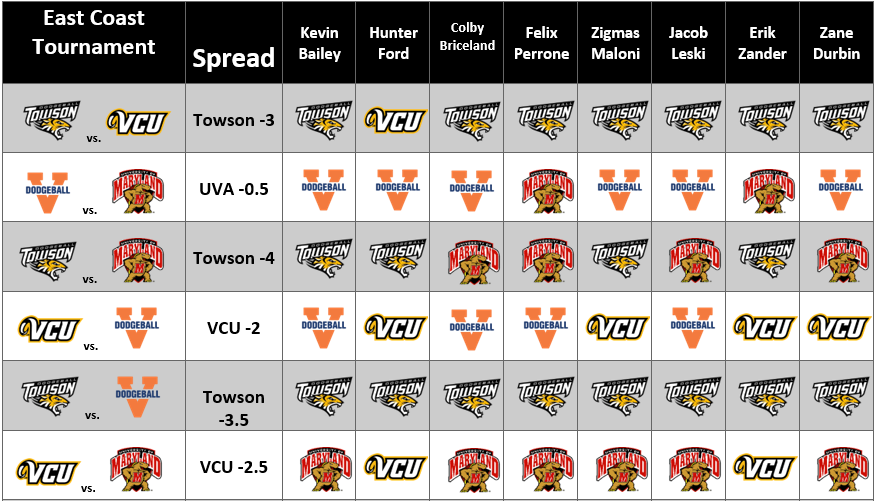